Eve of the Referendum

Tomorrow dawns the day of reckoning for me. It is a huge decision, and although I am only a tiny part of it, I will be putting my mark towards my country's future tomorrow morning. 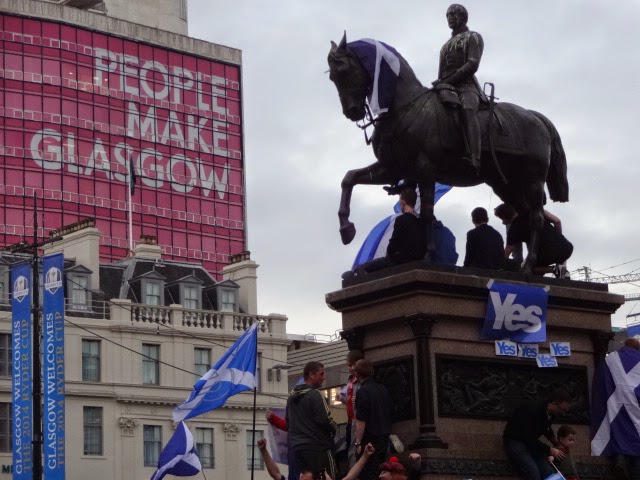 I am leaning towards a yes but what a huge leap into the unknown this will be. The alternative is no less scary as a no vote would allow the Westminster government to put away their pretence of devo-max and trample Scotland for daring to oppose them. Both outcomes will be divisive. A yes result will mean Scotland stands alone and a no result will mean a justifiable outrage from the other nations of the Union who must stand by and watch Scotland potentially being gifted extra powers. 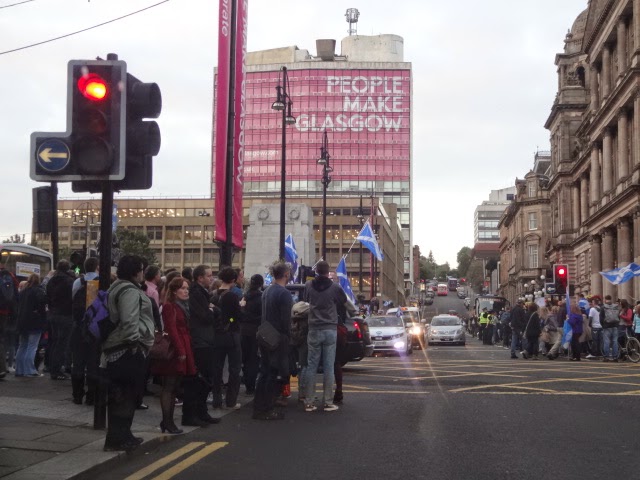 I'd heard there was a gathering in George Square in front of the City Chambers so decided to go and have a look on my way home from work as I haven't joined in any public events with either side. That this one was a Yes event didn't sway me as there was no more definitive evidence to be considered. 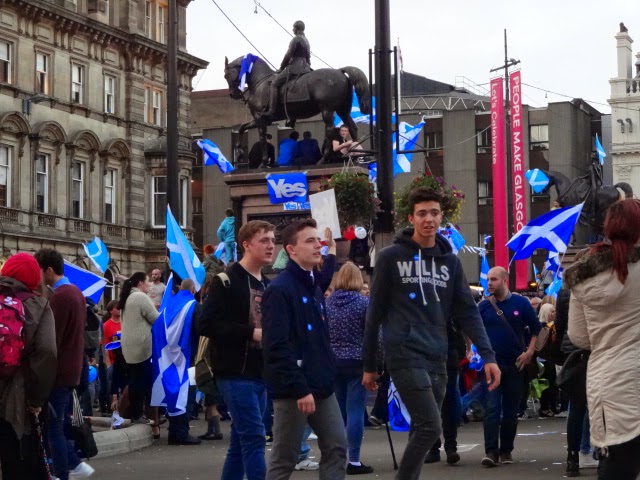 It took me nearly an hour to get round the square as the traffic was all but parked, hence the lighting differences in the photos as it got dark. 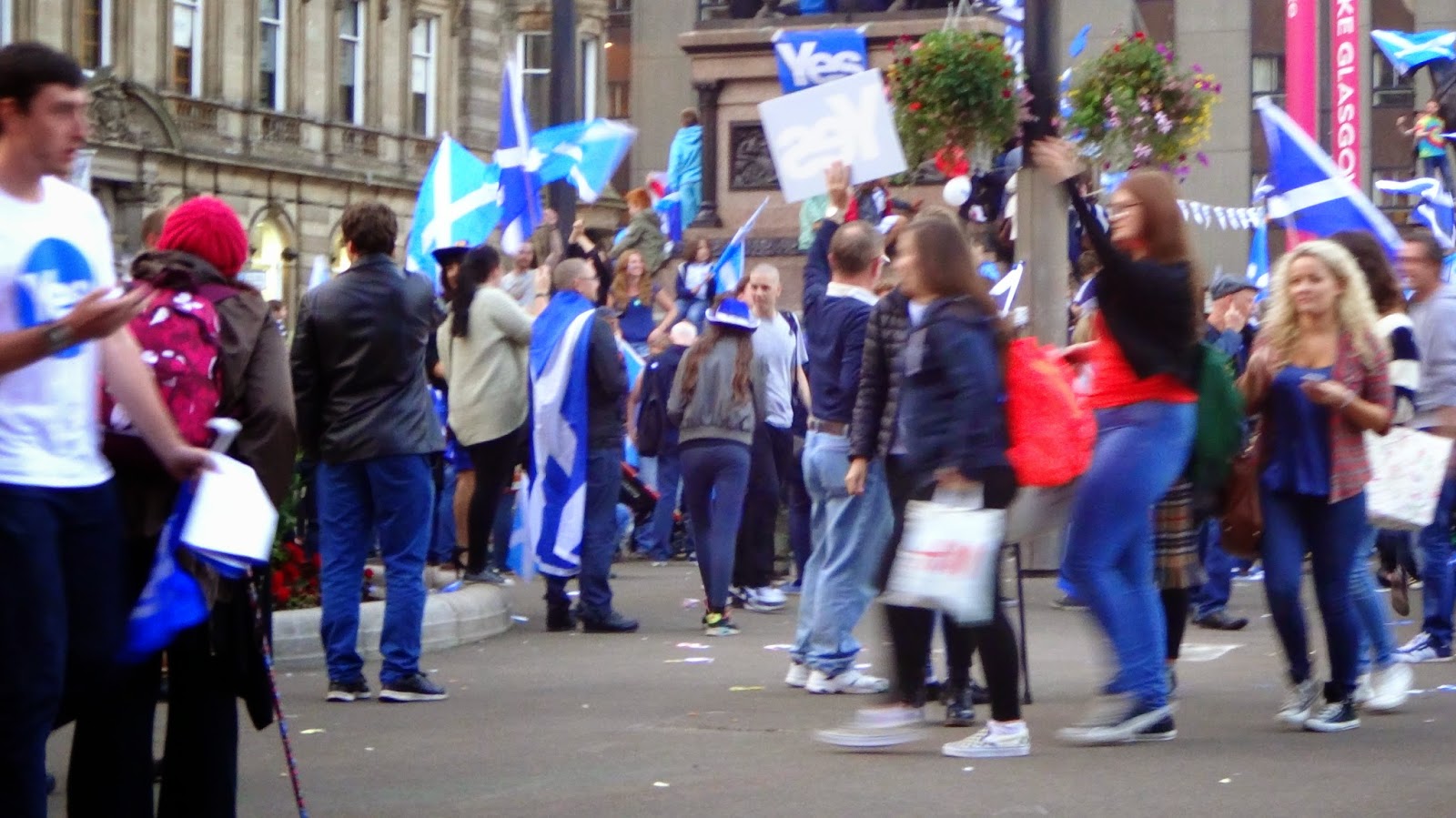 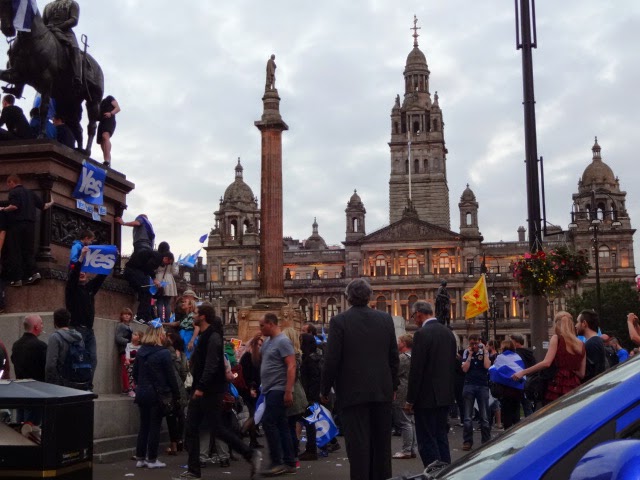 No, I do not know what possessed this man to drive round with two planks sticking out of his windows with flags......! 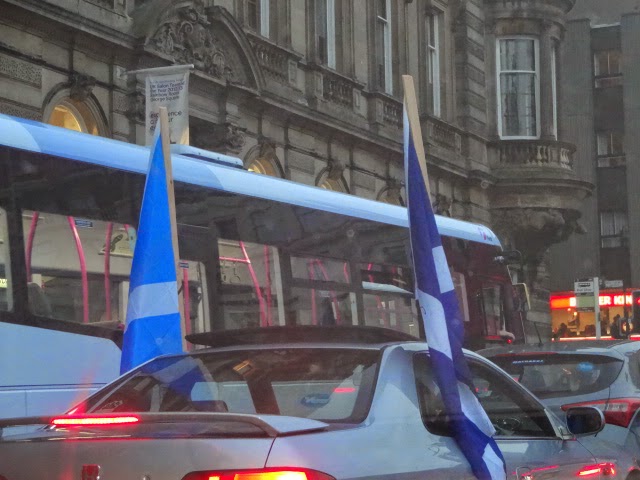 The atmosphere was very benign and congenial and I had lots of mini conversations with people passing by as everyone was so chatty. The funniest were two African chaps who were clearly pals but smilingly opposite in their views. 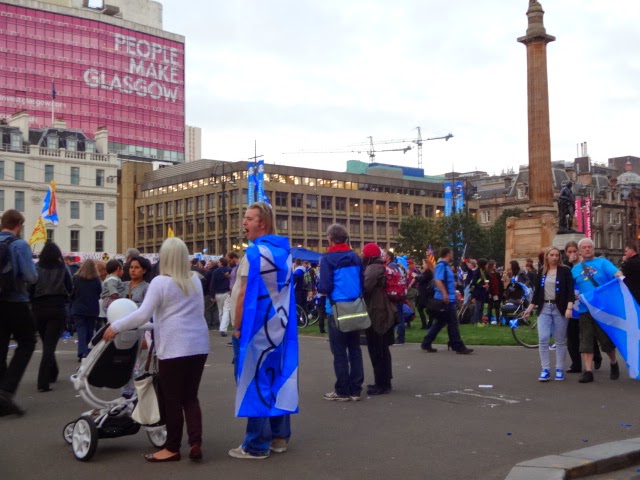 And yes, I did take one of this chap's booklets, as it would have been rude to refuse. I mean, who refuses a nice mannie in a kilt.....? 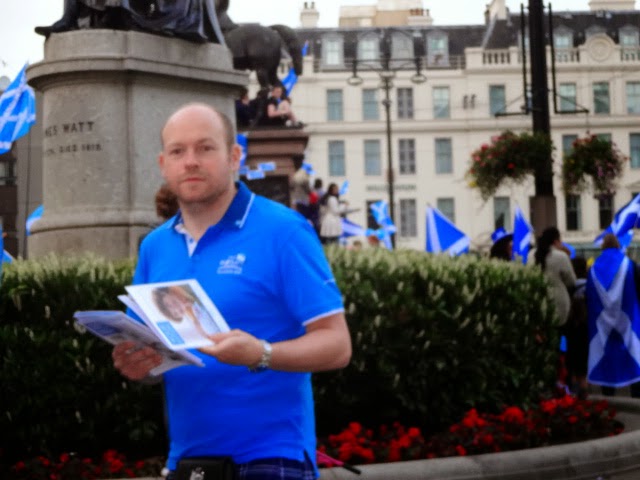 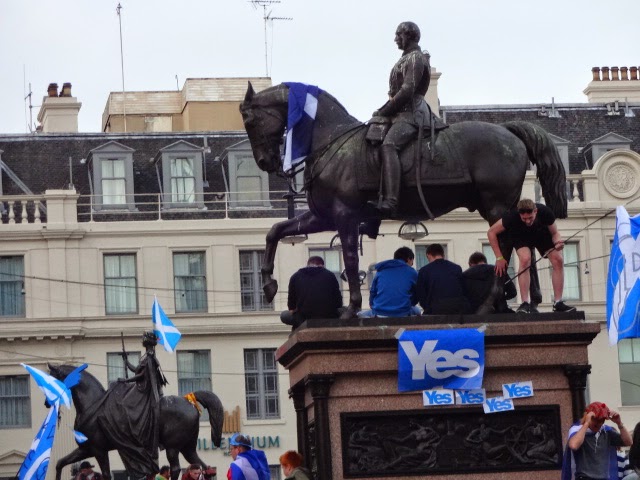 I've heard rumours of people who claim they've been 'abused' for holding mainly No voter views but this chap with the fabby bike and the no flags and stickers was a being treated like a star. 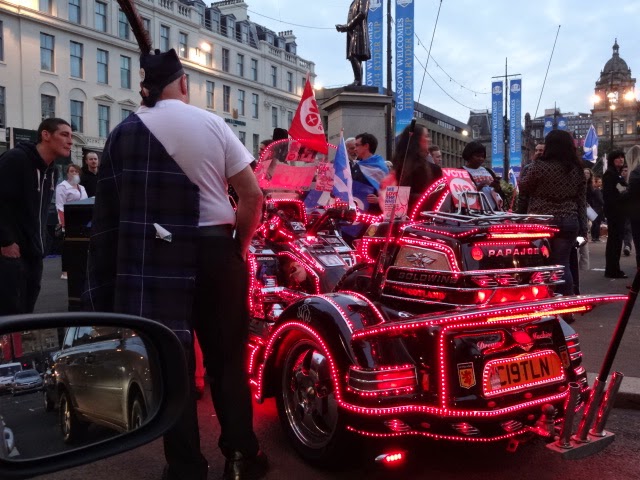 He was very friendly and happy to pose with a whole succession of people sporting yes badges and items. The black Yes shopping trolley near the front of the bike is one of the odder items I've seen. 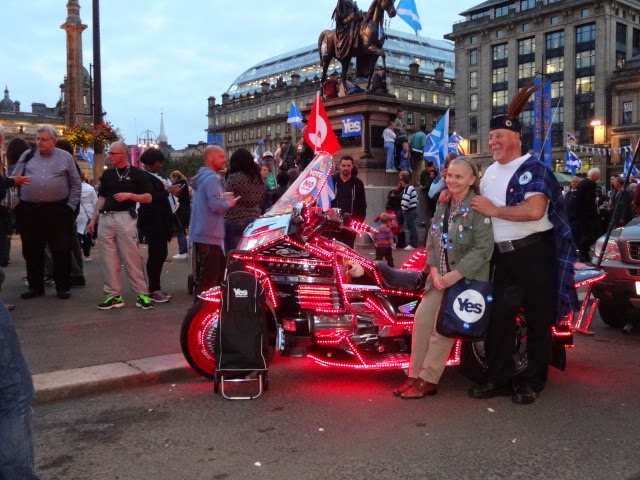 There was bagpipe playing, speeches and spontaneous singing. I joined in the start of Flower of Scotland but felt really choked and emotional, which I hadn't expected. The enormity of this decision and what it will mean for all of us just seemed to get so very real now that it has finally arrived. 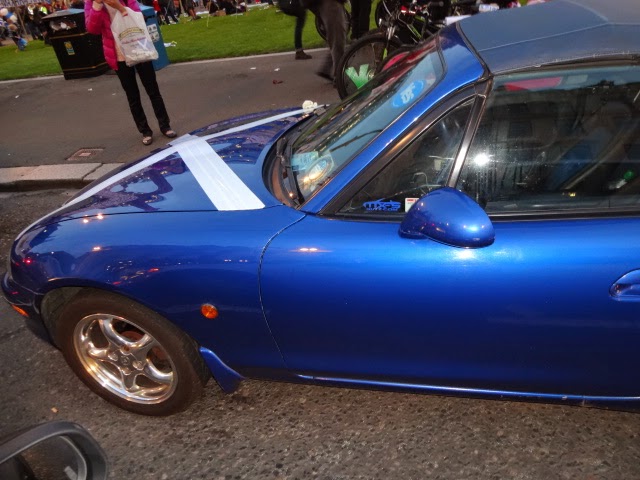 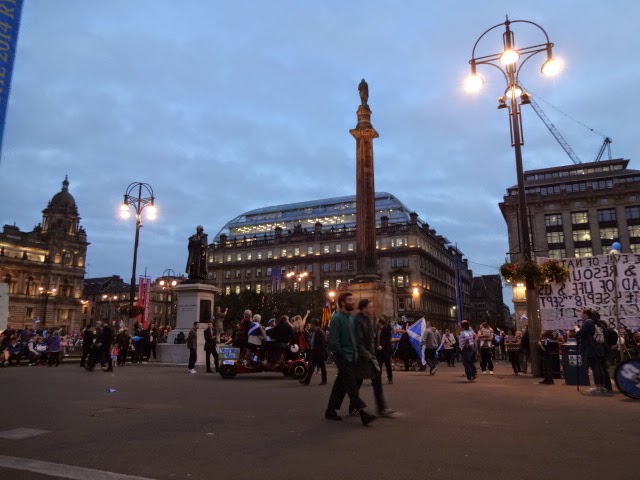 This is the lion in front the of the City Chambers which is a challenge for every Glasgow child who aspires to be big enough to clamber up onto it with a sense of absolute achievement. I think it is part of the Cenotaph so probably very disrespectful but nonetheless one of mine and many others' childhood  memories. We are kind of known for 'embracing' our statuary, or sticking a traffic cone on their head, as the Duke of Wellington in Royal Exchange Square knows all too well! 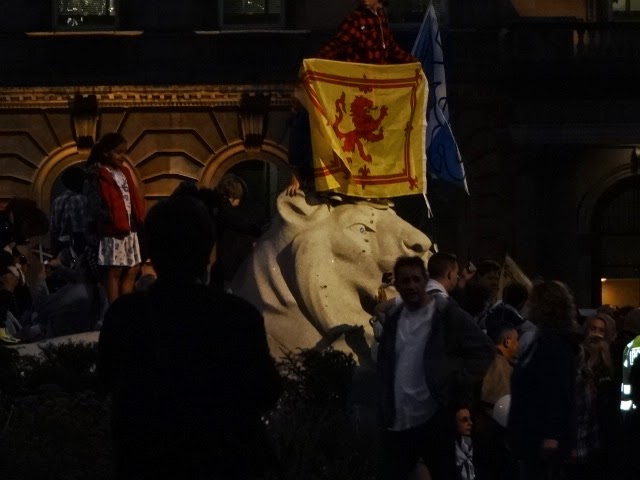 The City Chambers is a very lovely looking building, especially in the twilight 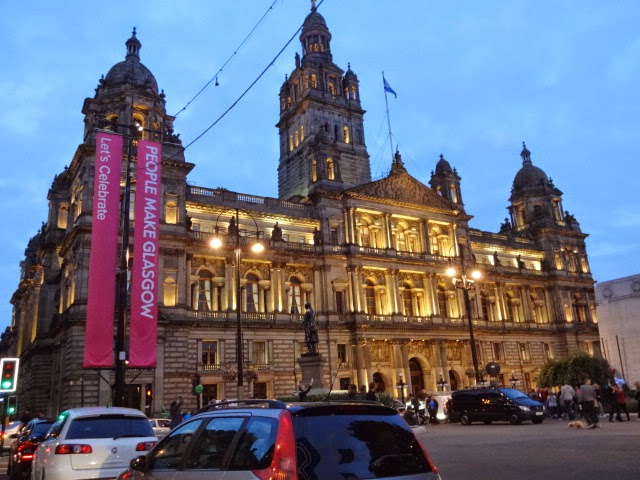 No matter what the result of the referendum is on Friday, or how I vote, change will be inevitable.
Posted by RedSetter at 00:35