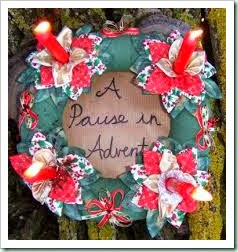 My Pause this second week of Advent is on the subject of being present. Thank you so much to everyone who commented on last week's Pause for your loving and very kind words.

On Sunday I'd hoped to sit and consider what my Pause might be as nothing particular had sprung to mind and I didn't want to write something trite. However, life brought me a lesson! My Mother has been increasingly unwell cognitively and is presumed to be in pain. For the last fortnight she's been distressed and irrational including refusing her medication which now has to be given covertly. I am not going to go into the gory details but despite the best efforts of the wonderful carers she was a ball of fury and no-one could connect with her on Sunday. It was all they could do to get her into some clothing as she had been naked, livid with rage and lashing out on the half landing of the main staircase.

When I arrived it was clear she had no idea who I was which is the first time there was absolutely no recognition and her behaviour included purposefully trying to push the carers and myself down the long flight of stairs. The attention was simply fuelling her distress so I suggested they leave her with me and I sat on the steps on one of the wings of the staircase within reach to grab her if necessary. I tried all my tricks to get through to her to absolutely no avail and eventually resorted to feigning calmness and disinterest while being alert to making sure she was safe. Many times while I sat there I questioned what the heck I was doing. I was doing nothing to improve the situation and anyone could have done the same for her. There seemed to be no value to our relationship as the connection was broken on her side. She persisted in standing for two and a half hours which was obviously causing her great discomfort but she was absolute in her refusal to sit as she knew better than everyone. Eventually, she began finally giving into the pain and effort of standing and she agreed to sit beside me on the stair. When she accepted my hand to help ease her down she leant against me in distress, and I have to admit I just sat cuddling her with tears pouring down my face at seeing her so distraught and out of control, oblivious to who I was which was heart-breaking.

Obviously, this is a personal story which has little to do with Advent on the face of it. However, afterwards it has made me reflect on the nature of 'being present' which is a facet of the reciprocal relationship with God. Relationships sometimes seem deepest in those times where neither party asks anything of the other beyond being there and knowing an unconditional love which transcends words or actions. I have always loved the Footprints poem and the hymn Walk with me O my Lord which characterise the element of God's relationship with us which enables us to live our lives while feeling the comfort of having his strength nearby.

Being present can be both an active role of witnessing or it can be a passive, loving and non-judgemental role which contains humanity, humility and compassion all of which are intangible but deeply felt. Being present can also refer to engaging in the present moment.

Being present with my Mother on that staircase listening to the rain drumming on the glass cupola overhead met a need neither of us could articulate. I felt utterly useless and wondered why I continued to sit there as clearly I wasn't 'doing' anything yet I felt compelled to remain. It also made me think of my own relationship with God this Advent.

I have been trying to throw myself into Christmassy things, to power through work and make an effort with the house. I thought this purposefulness and activity was me being present in the moment which would strengthen my connection with God, allow me to hear his voice and embrace his presence. Yet Sunday showed me that being still, attending and pausing to be present can be of equal value. Just as we often call on God to bestow the blessing of his presence in our lives we perhaps also need to be reminded that the quiet gift of being present is something we too can give to someone in need.
Posted by RedSetter at 02:39