Taking Crochet to the Dark Side

I read some posts recently about Zpaghetti t-shirt yarn and quite fancied making some crochet bowls out of this unusual yarn. It is made out of recycled t-shirts from the fashion industry and is used for chunky projects. I did think it rather pricey but it does come in a humungous centre pull ball. 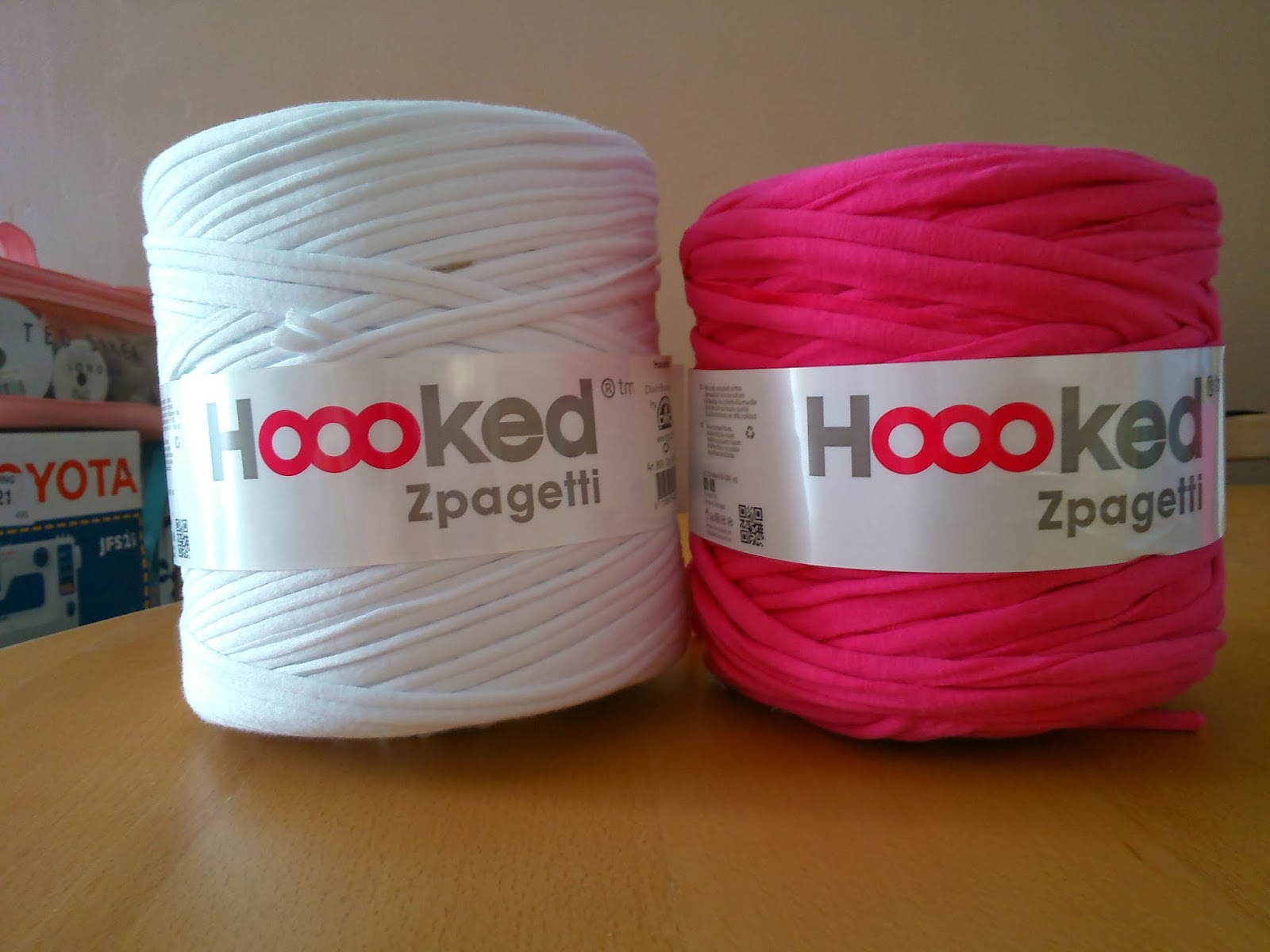 I'm not sure how it will crochet up but I was very disappointed to see one of the joins was tenuous to put it mildly. It is not worth returning, it as I'll just sew it, but not what you expect. 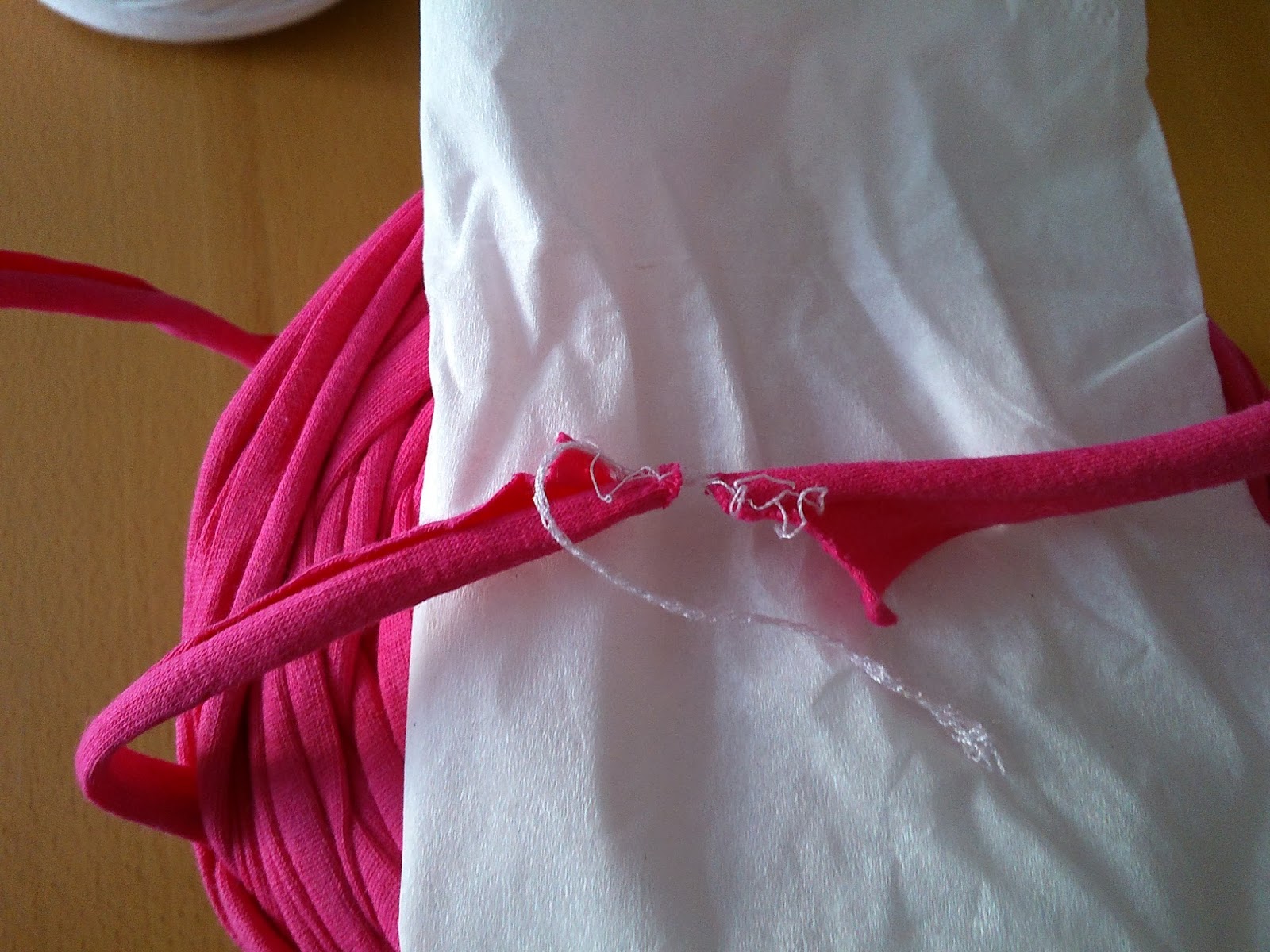 While I was looking for the best price for the yarn and a 12mm crochet hook I came across an absolute 'I want' toy/gadget/gizmo crochet hook which LIGHTS UP! My excuse is that I only bought it to try it out AND I needed a non- metal 4mm hook AND to make up the order to the minimum cost for free delivery BUT I suspect we all know that none of these excuses tell the whole story. 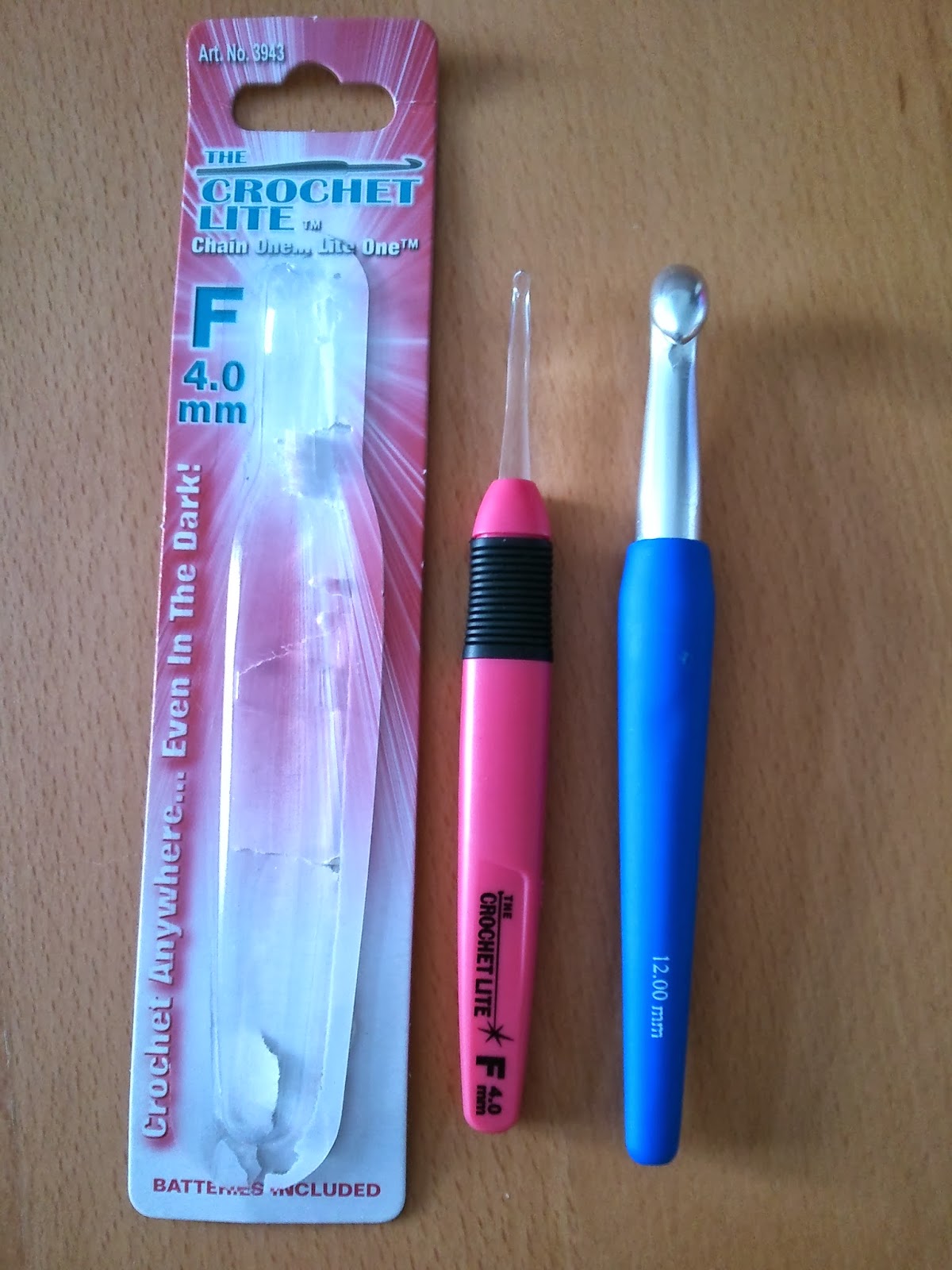 This is a seriously bright LED which lights up the smooth snag-free clear acrylic crochet hook. It says you can crochet in the dark with it but the point of this is lost on me. Why would anyone in their right mind crochet in the dark?!?!? However, I can definitely see me using it with dark yarns in the living room as a more comfortable alternative to having the spot light on which is very hot and uncomfortably bright with prolonged use. Time will tell whether this was a wise investment or purely a gimmick but I can tell you my new yarn and light sabre crochet hook have really cheered my day up. 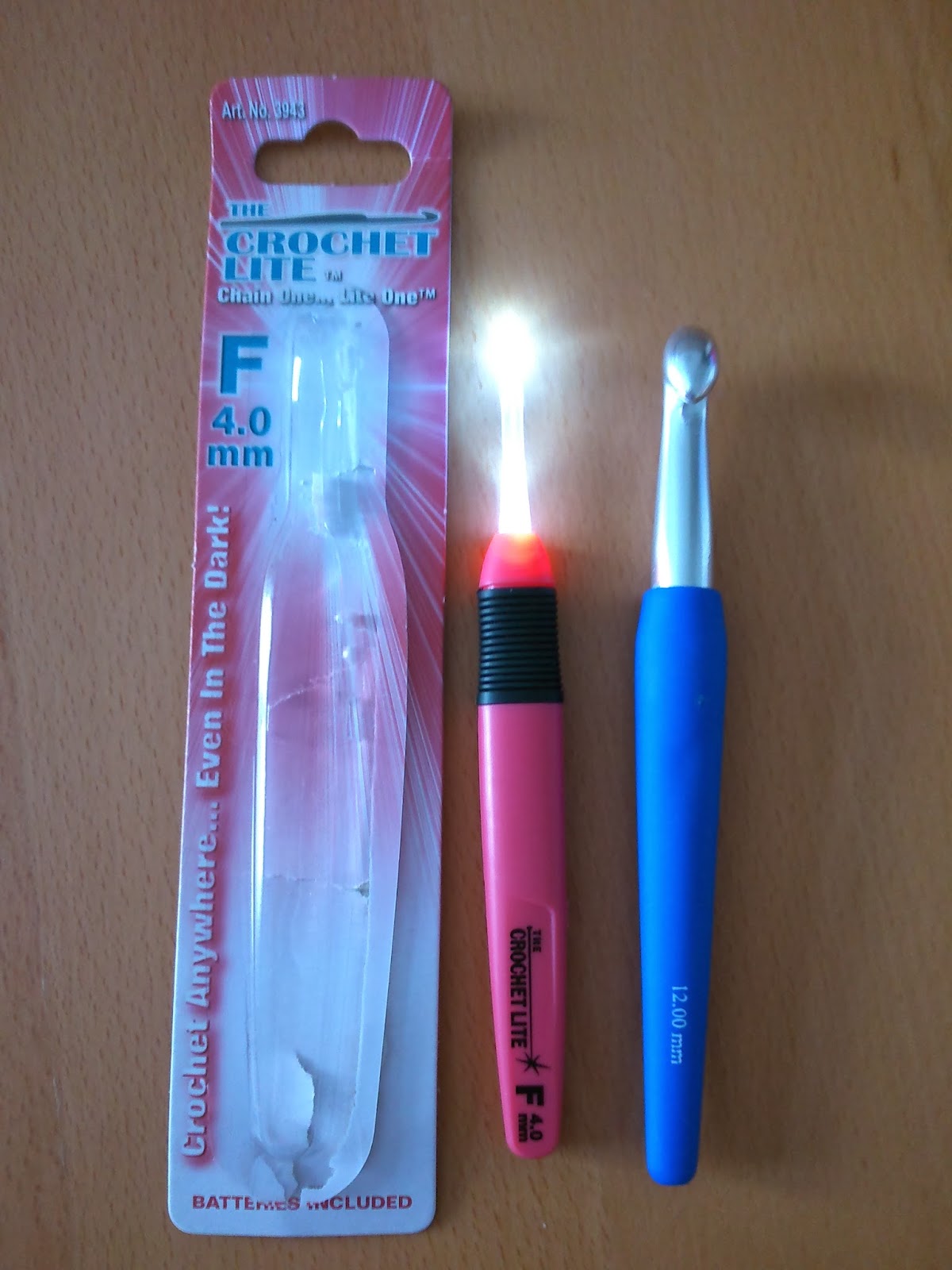 The light from it really pin points from the end. 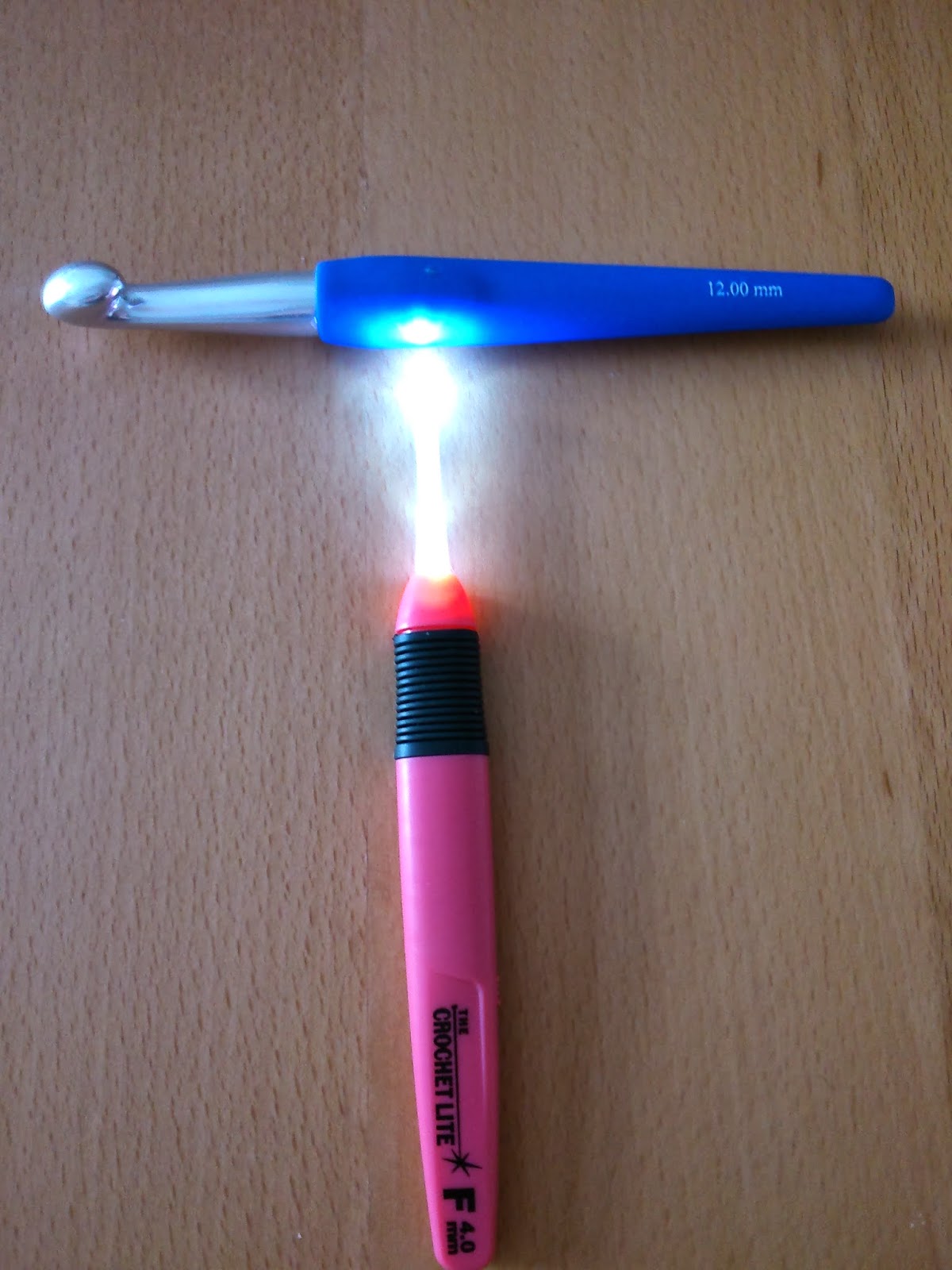 In other woolly news, I have made my first shell pattern cushion cover thanks to Annette at My Rose Valley. I found her tutorial really lovely to follow as she includes hints and the kind of things a friend would say if helping you in the brackets. 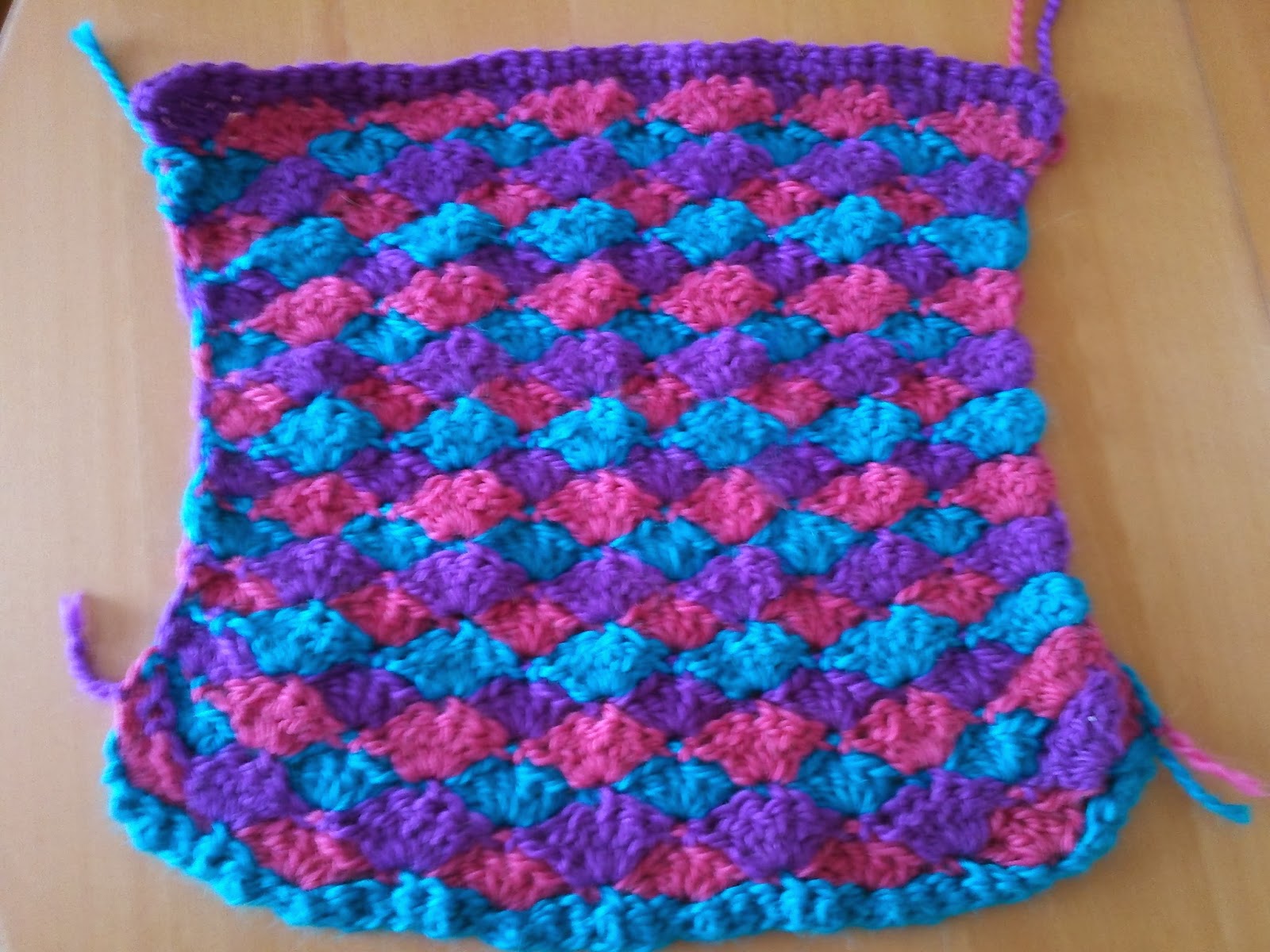 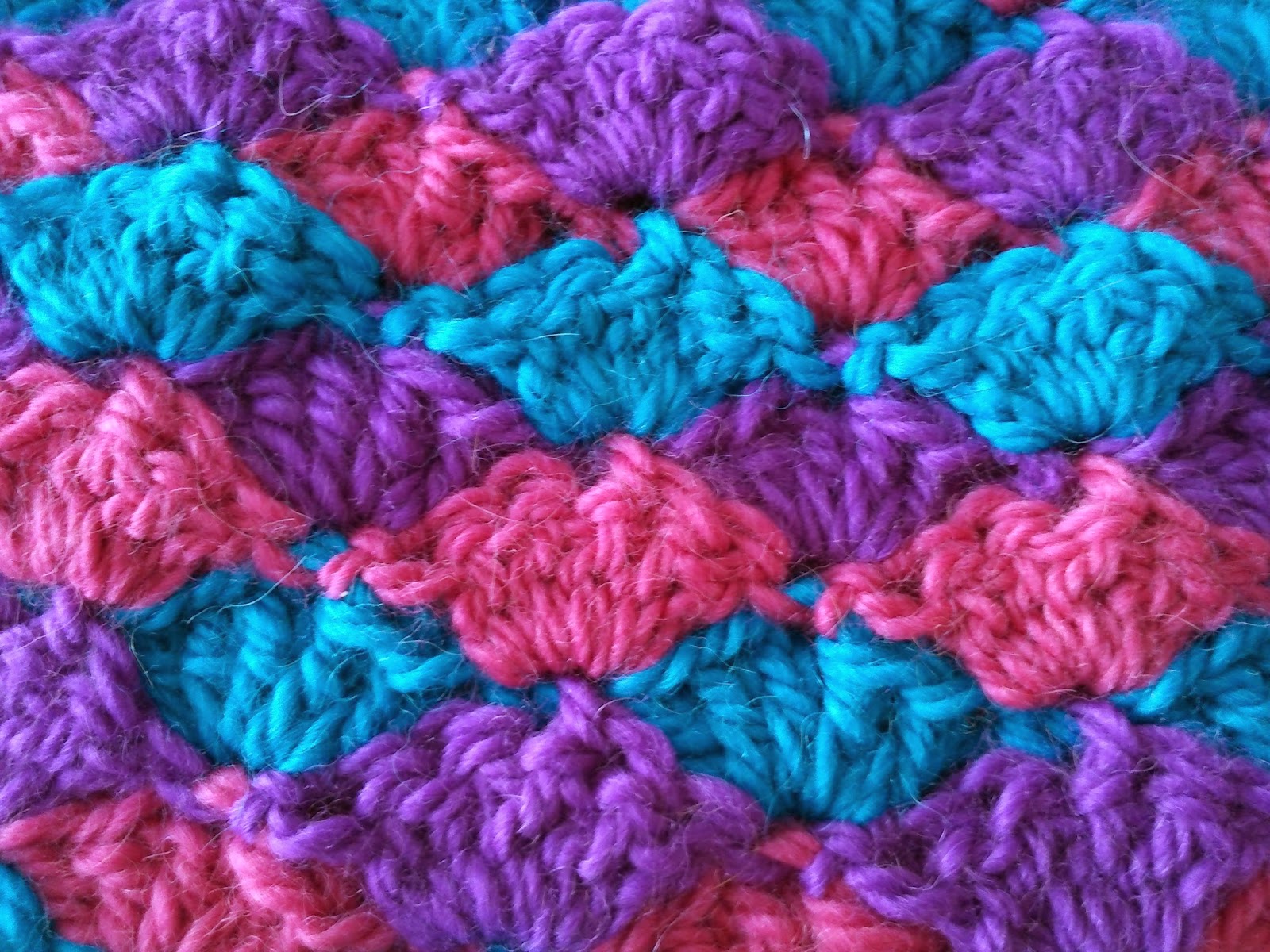 My other new stitch is the ripple stitch which I've learnt courtesy of the lovely Lucy at Attic24 which was another hand hold, 'sitting next to a friend' tutorial. 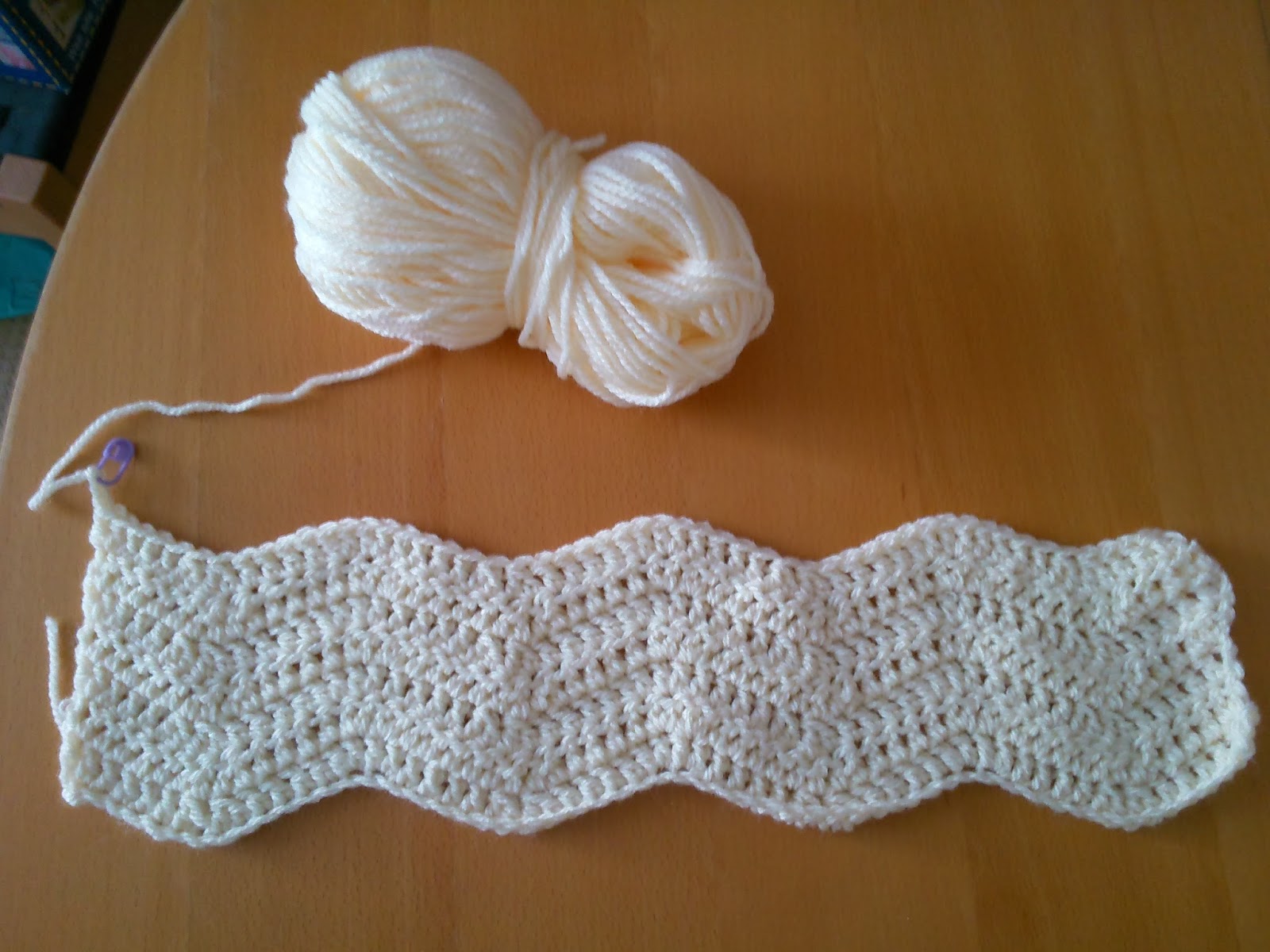 Both were intended to be made into cushion covers for the dining room chairs. Each one was meant to showcase a different stitch or pattern. I went a little awry with the shell one as although I kept measuring it I've somehow made it too small. It's the whole cushion measuring saga all over again! Not to worry as I now think instead of doing them in all different colours it might be better to keep them in the same colour as this will be more uniform and also showcase the different stitches better. 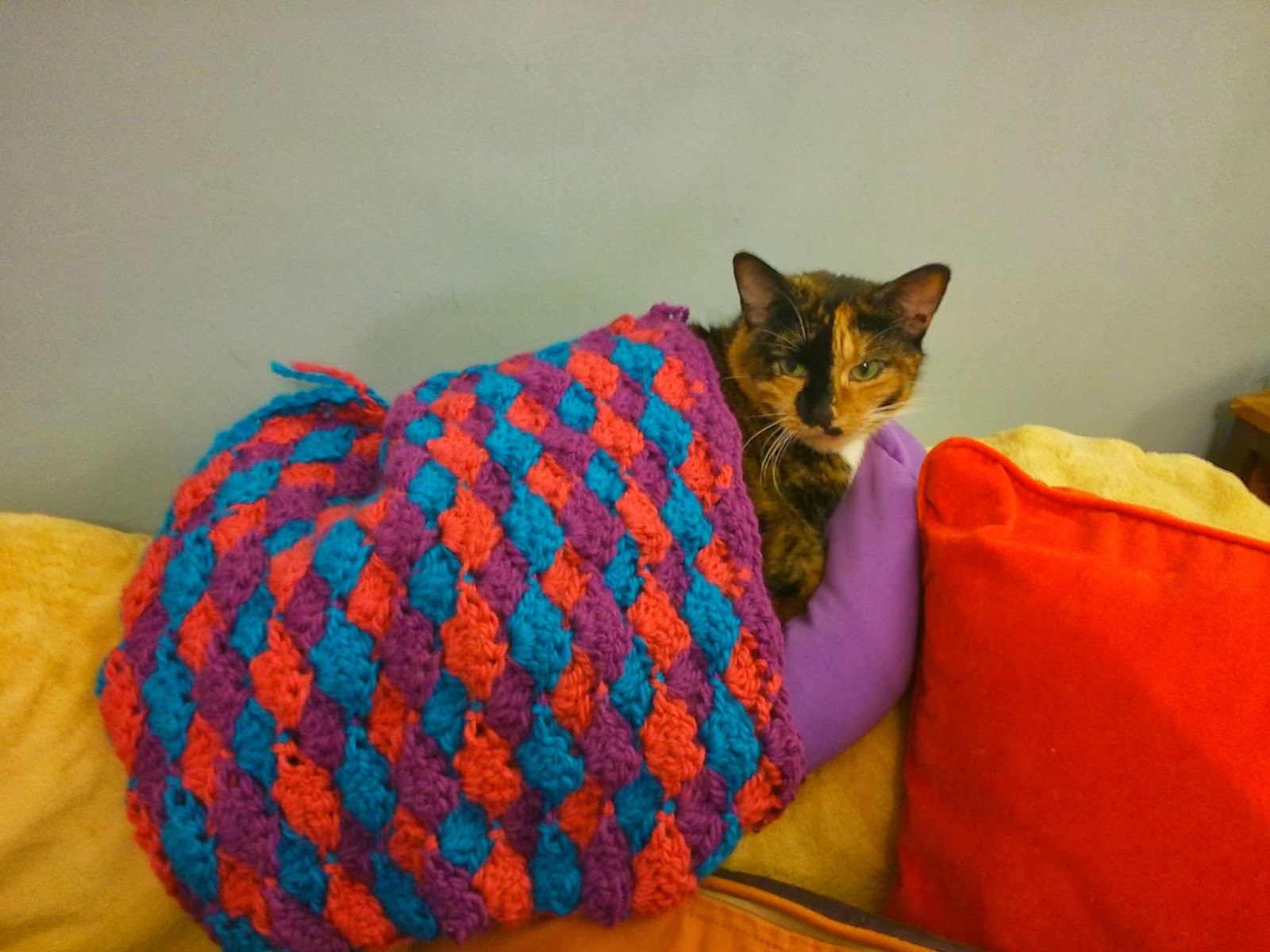 Still it's no loss what a friend gets, and Magic is definitely not complaining about using it as a blankie until I make it into a beanbag cushion. The colours are actually as the non cat picture earlier. 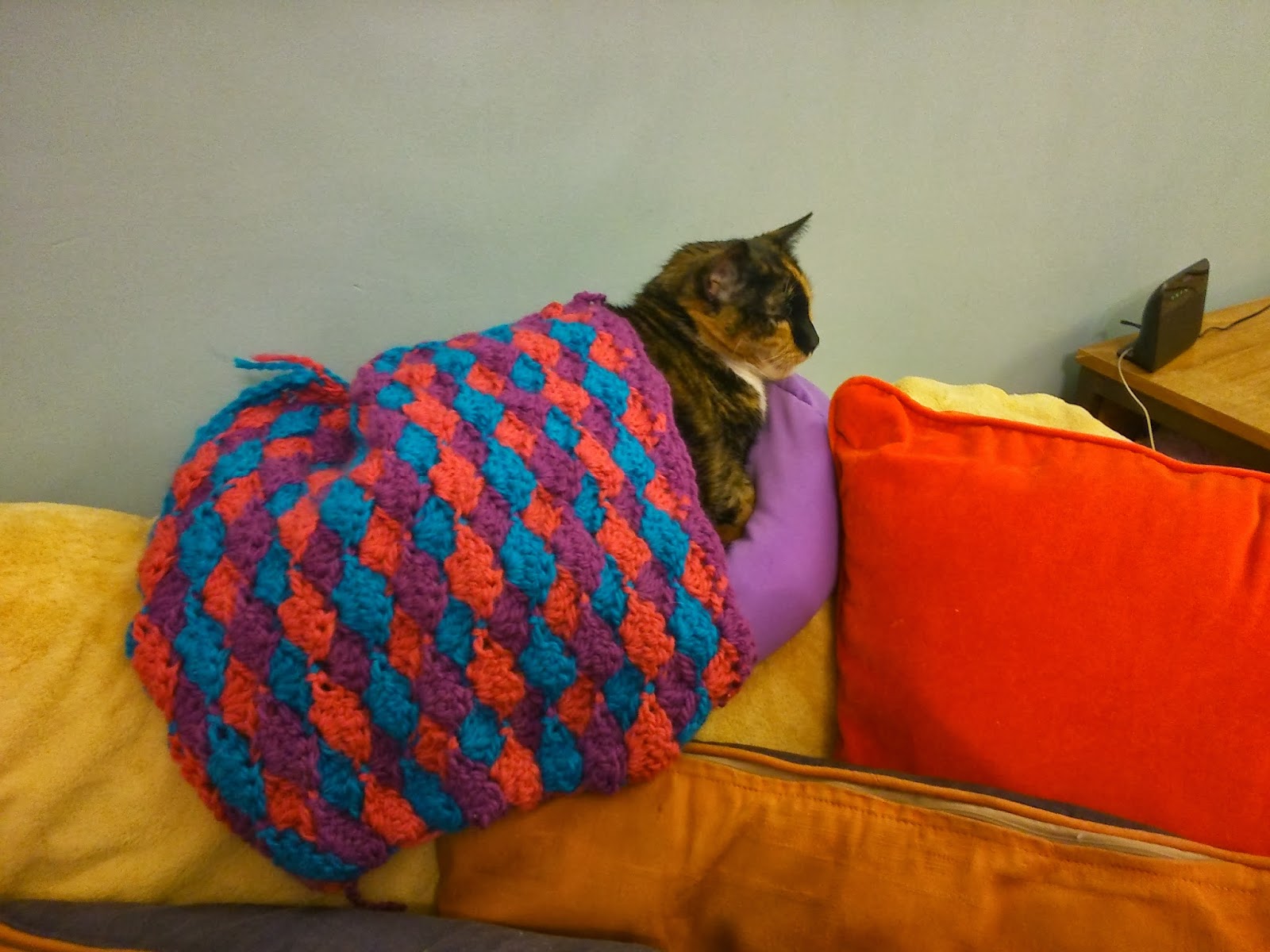