A Grand Day Out: The Trossachs

This was a Grand Day Out my friend and I went on during the heatwave while the Commonwealth Games was on and has been in my queue for posting. I am not genetically or temperamentally suited to being over heated and the fact I still had my chest infection and no respite from the heat, even at night, made things hard. I'm better now and it is significantly cooler (and wet!!!) so we are all coping again. I know some of you live in significantly hotter places and cope but your average Scot is more of a larder item best kept cool and damp! You only need to see the shocking radiation style burns on the loonies who expose themselves the second the sun peeps out to know this.

There was a minor skirmish on one of the hot nights as everyone tried to find a space on the bed which was directly in the middle of the air cooler flow, on top of a cool bit of the quilt and definitely not touching anyone or anything else. My ankle got tail whacked as I managed to get my roasting hot foot too near Magic while searching for a cooler bit of the quilt. I'd have hated to see the aerial picture as there were bodies, legs, arms and paws splayed everywhere. Red wins the prize for funniest 'unable-to-cope-with-the-heat-while-wearing-a-fur -coat' impression. 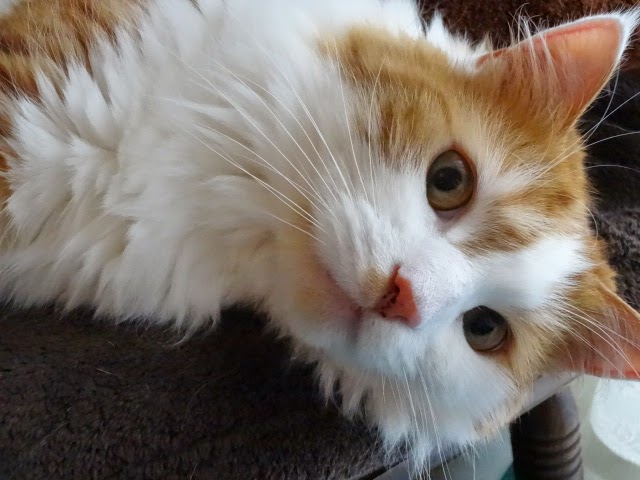 He kept doing his agonised wee howl an inch from my nose till I realised he wanted a space at the cooler edge of the bed so, with some negotiation everyone rejigged to afford him a place. This was fine till he got comfy and did a big starfish impression thus taking up more space. Once again proving that if you give a cat an inch you'd be as well chucking in the bed and all worldly goods too. Never let fluffy cuteness fool you! 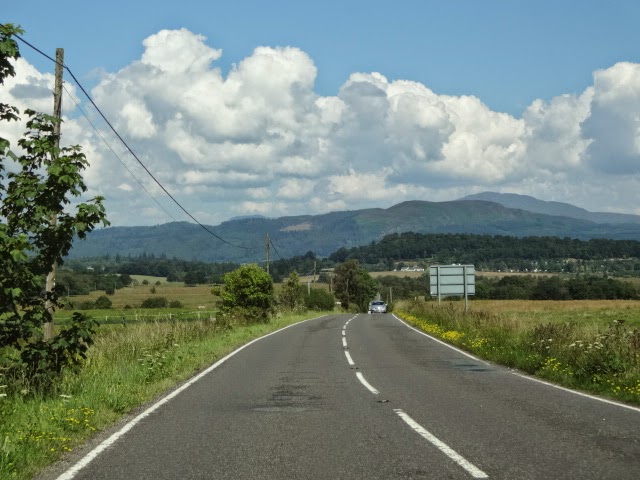 My friend and I are always promising ourselves we'll make more time for ourselves and have committed to trying to find a day, or few hours each month or two to do something together. We have a notion to do something 'tourist-y' as it seems mad that we rarely seem to take advantage of what our own city and country has to offer on the doorstep. As the Commonwealth Games was taking over the city our decision over breakfast at the Wishing Well in Gartness was to do the Trossachs Trail and Callander. It turned out to be an excellent choice which was spectacular and gave some welcome respite from the heat as we drove along with the windows down and the sunroof open. 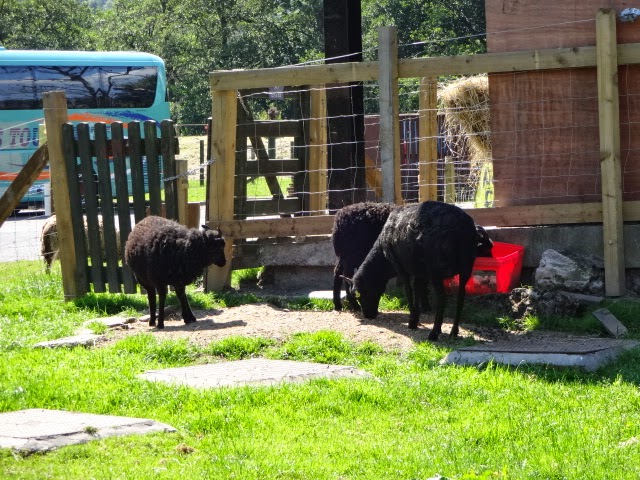 Our first stop was at the Scottish Wool centre at Aberfoyle. Inside it was more gifts and clothing rather than yarn which was rather disappointing but good for the purse! 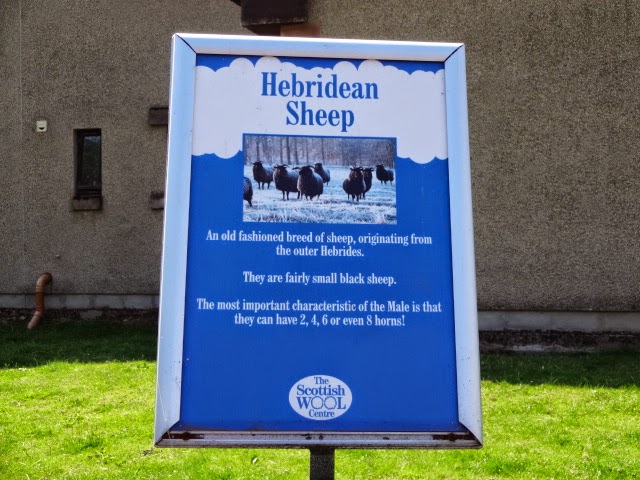 There was an owl display outside but it was sheltered from the scorching heat. 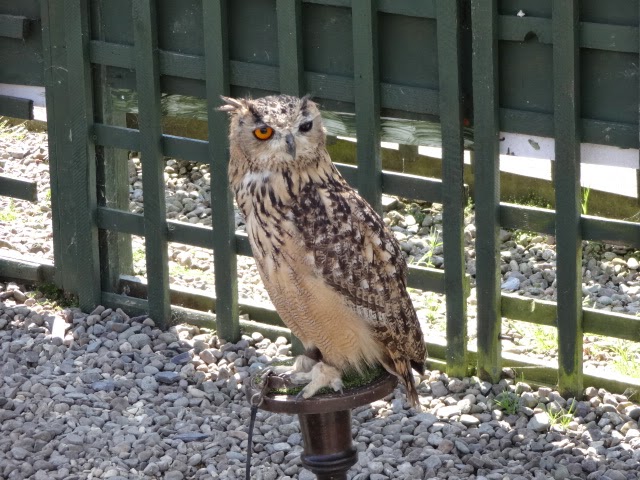 Also outside was a fabulous sheep and duck herding display by this chap who was training the cutest young collie in history. 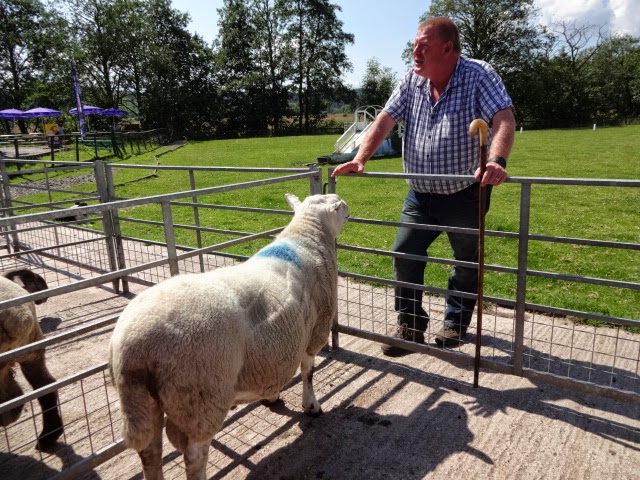 I could not believe I didn't get a good pic of the dog as it was seriously gorgeous and so eager to work. You can almost see it to the left of the pic but I am annoyed with myself as I wanted to dog-nap Brit as he was amazing. 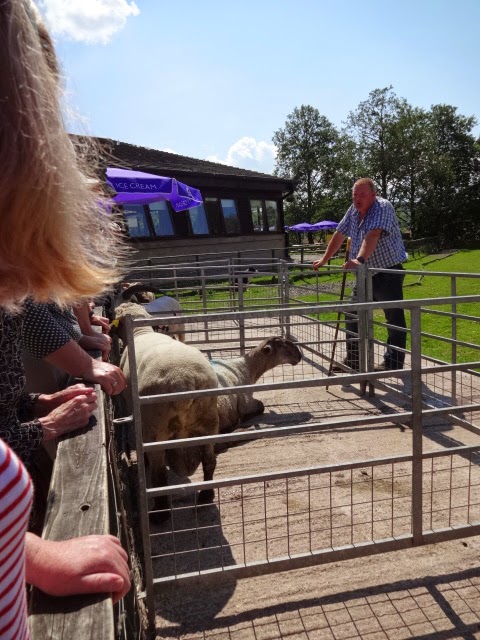 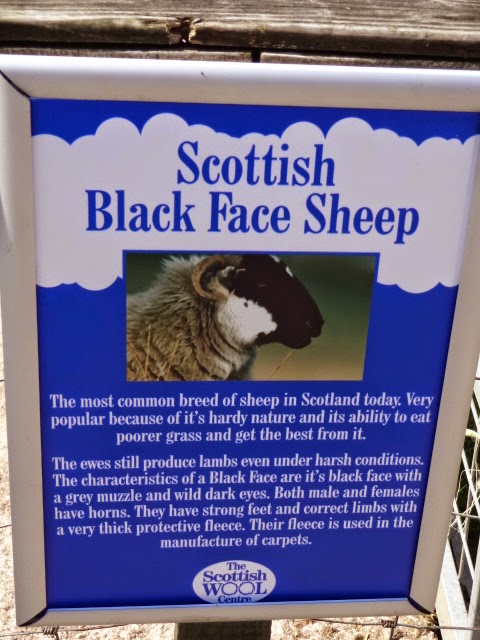 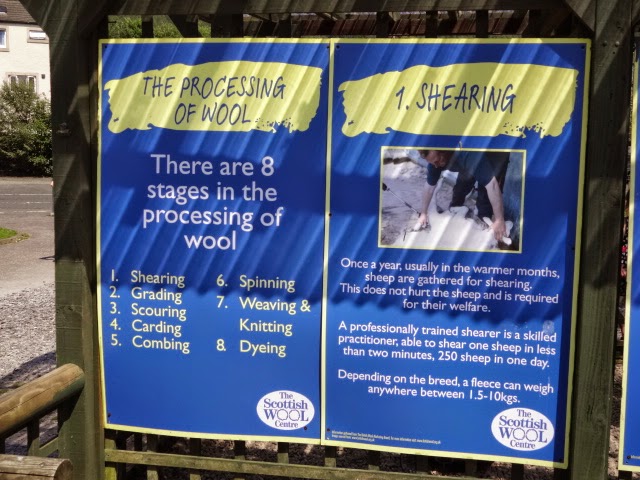 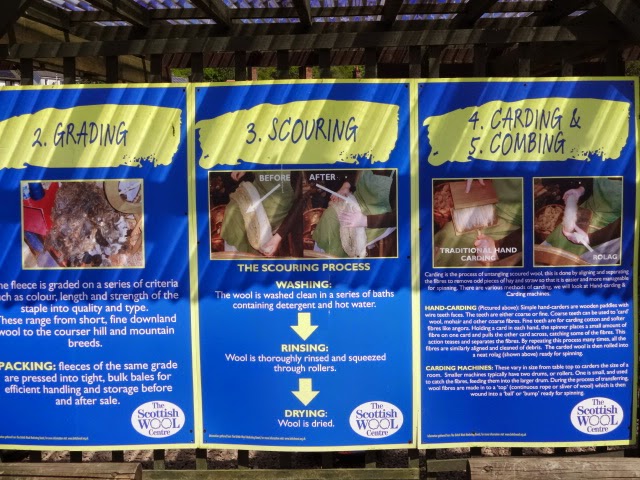 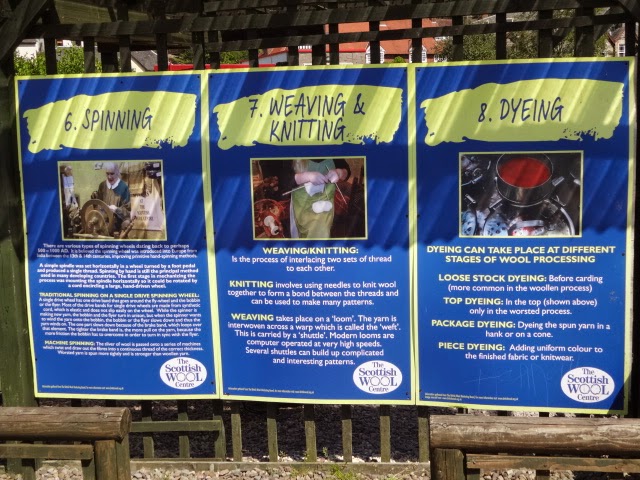 I think the mountain in the distance might be Ben Lomond but I'm a bit geographically challenged so don't take it as gospel. 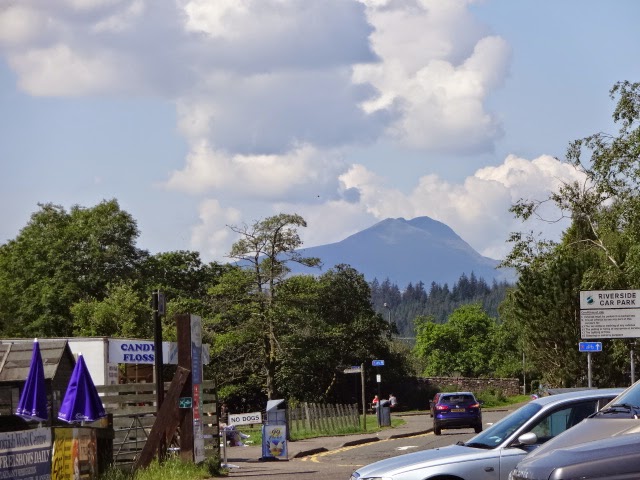 Loch Katrine is where Glasgow's water supply originates from and is famed for being pure and clear. I'm not entirely convinced how pure the stuff is that flows from my home tap as we've had some spectacular blunders from Scottish Water over the years including an accidental diesel spill and cryptosporidium contamination from sheep poop at the Milngavie works. However, new treatment facilities have been built or upgraded and this should have improved things. 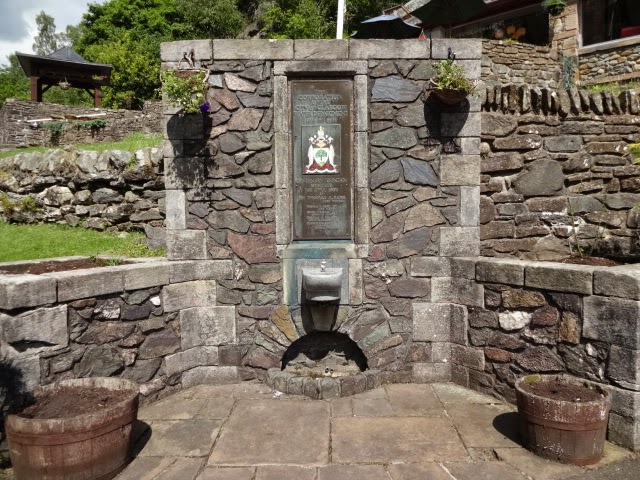 What really touched me about this drinking fountain was how much it reminded me of the Peak District Well Dressings that Louise has been sharing this summer. 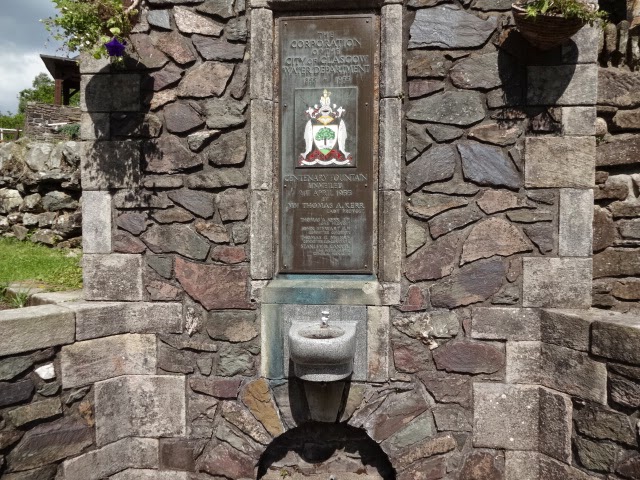 I've decided the next I go here I am going to petal a little plaque and place it beside the fountain as my own special link between my beloved city and the Peak District which I love. I just hope it is not prohibited to place a little petalled dressing outside of the confines of the Peak!
I've no idea why this pic is squinty but can only think I was probably propped on my elbow crutch taking it and am so used to listing to the one side that I didn't realise. Either that or I was wilting in the heat as it was around 1pm and fiercely hot. 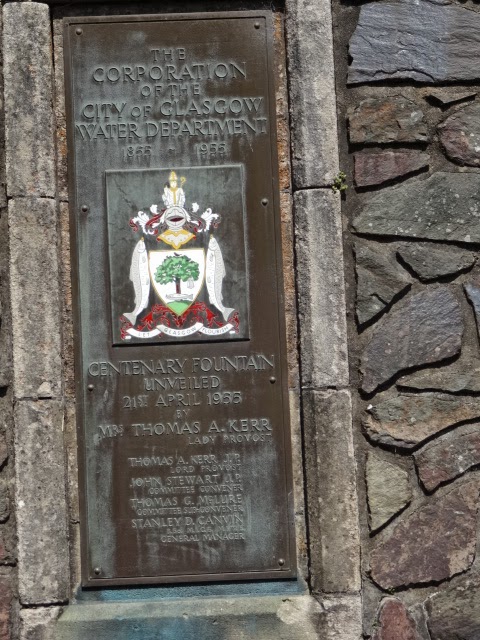 On the spur of the moment we decided we'd like to do the cruise. 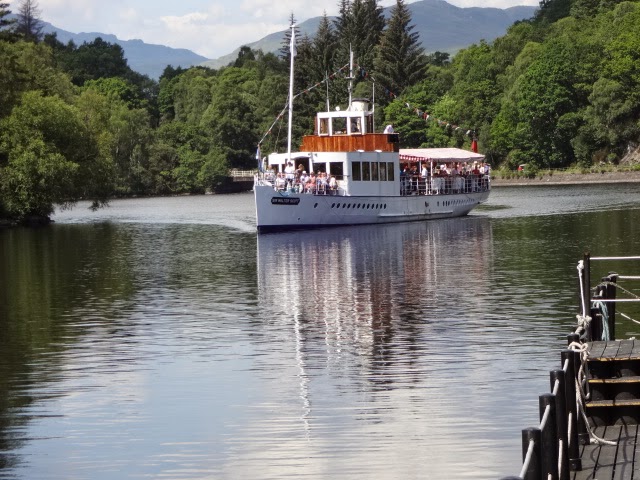 However, the lady in the booking office warned it was 'quite full' as three coachloads were booked on the one we wanted to go on in that kind of voice that says 'oh, you really don't want to do that...!' So we decided to save that for another day and go for lunch in the adjacent café. 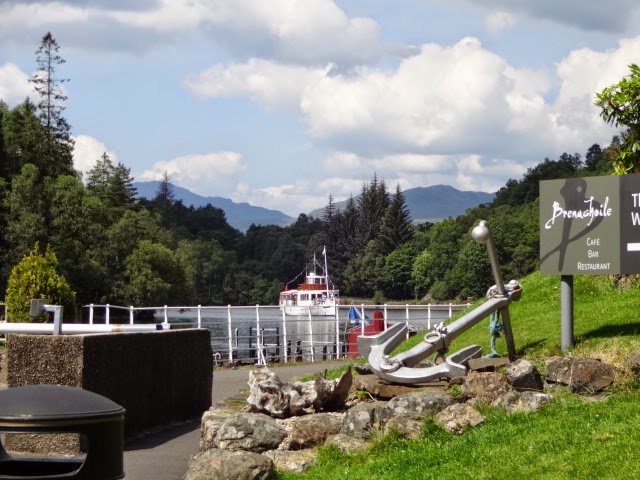 Just as well, as the boat was utterly mobbed. This is the view from our sweet little shady pagoda where we shared an afternoon tea stand, some snacky chips and gallons of tea, juice and iced water to rehydrate. 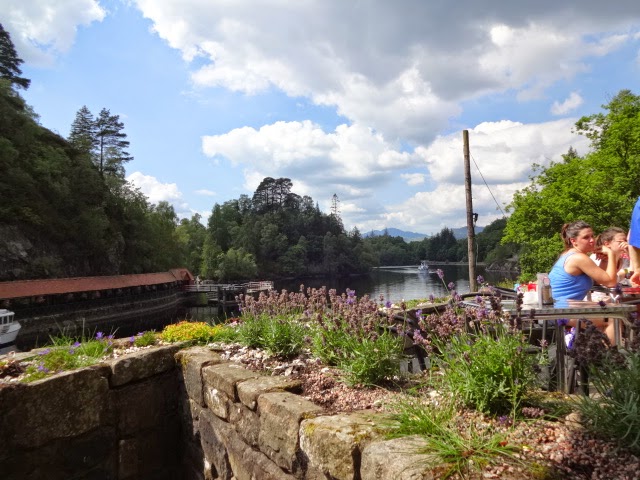 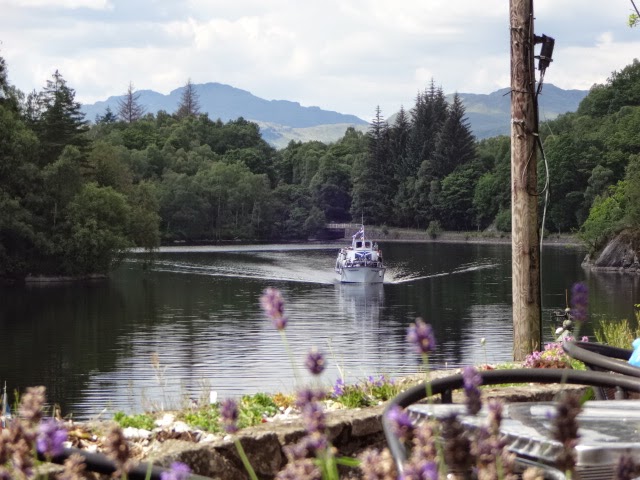 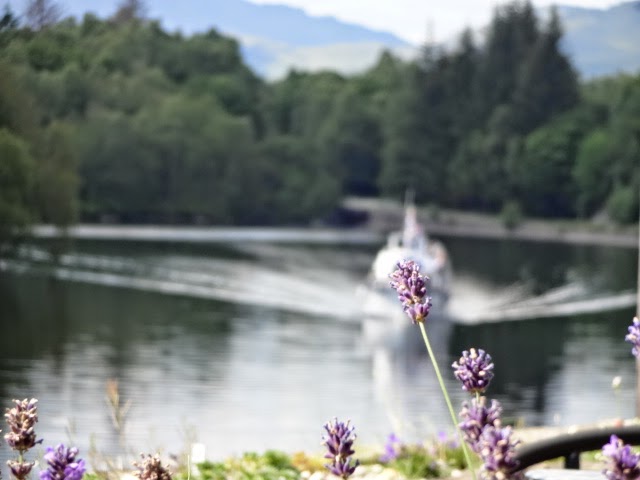 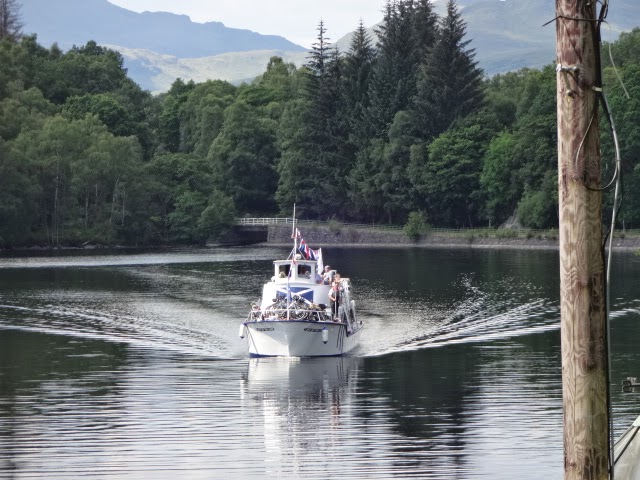 Sauntering back to the car we noticed an old fashioned telephone box beside the bike hire shop. (You'll note there is NO mention of us hiring or returning a bike...!) 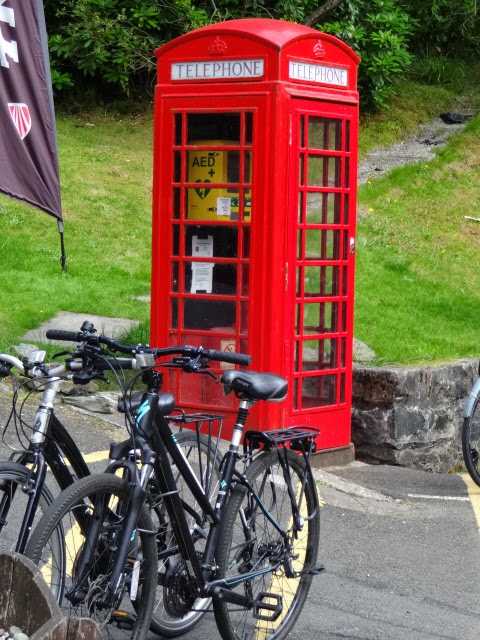 On closer inspection we realised it contained an AED defibrillator which seemed both odd and apt. Nice as a safety touch for a tourist area which caters for high volumes of often elderly coach tour parties or sporty sorts. However, my wicked mind was off having fun at the idea of some poor foreign tourist looking to call home and ending up with a bad perm and a shocking headache! Bet they'll 'reverse the charges' next time.....tee hee! 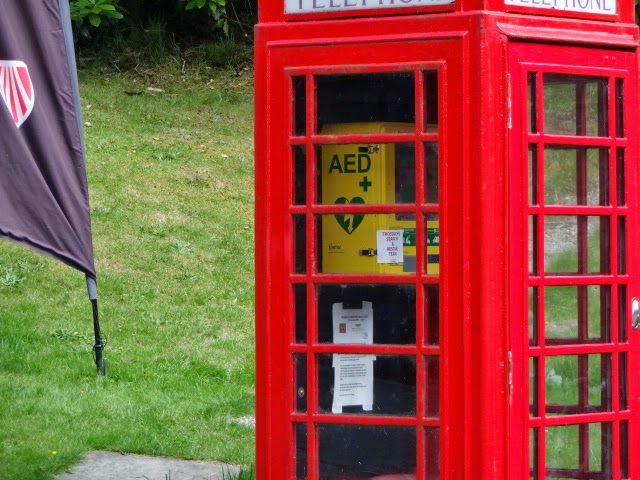 It could be worse, you could have been stuck in the car having to listen to my friend and I prattle on like this......still, it kept us amused. 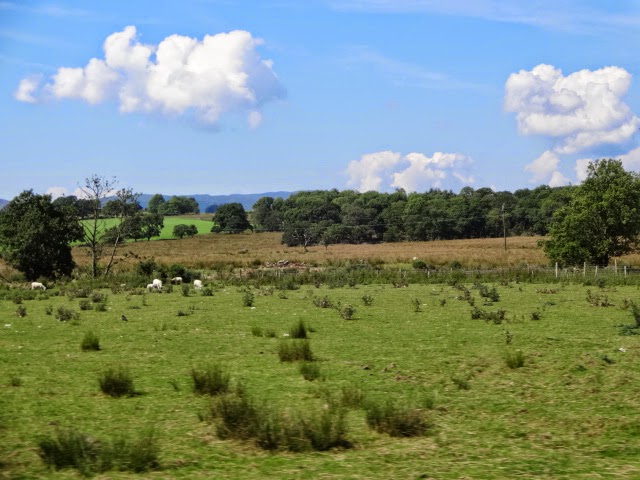 I should have taken more pics but I was just enjoying the journey and chatting so much.
On the return journey I was definitely in seriously soporific mood with droopy eyes as it had been such a fabulously relaxing day. Or at least I was until a BMW driver did a dangerous overtake heading into a bend and oncoming traffic and my friend had to take action. She is a very cautious driver and I feel very safe in her care but both of us were quite shaken with her having to avert a crash and me trying not to face plant the windscreen. Fair woke me up! 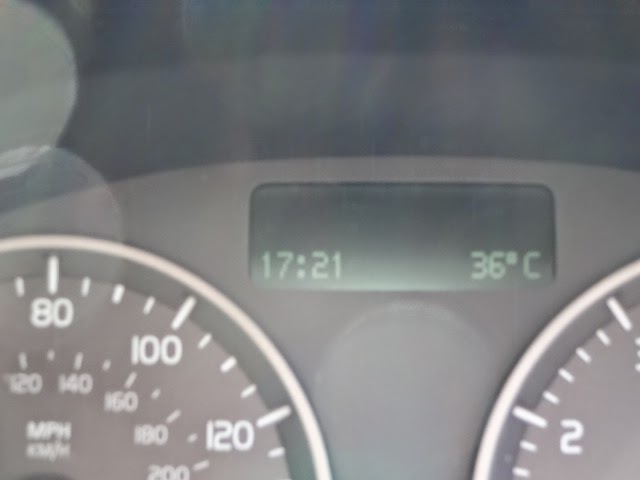 We had such a lovely day, and it was great to get some respite from the heat, especially as this was the car reading when I got back to mine after the air con had been on for five minutes. My friend and I have also decided she will do the summer runs as her car has a sunroof and I'll be the winter driver as mine has hot seats. Bearing in mind we usually only get a week of sun here each year I may have got the heavy end of this deal!

I hope you enjoyed accompanying us on another Grand Day Out.
Posted by RedSetter at 01:25