As promised some little snippets from my life as the CG's have touched it. I still have no interest in televised or spectator sports and have spent time avoiding any traffic issues which mercifully have not really impacted on my journeys at all even though the liveried Games vehicles depot was on my route to work. 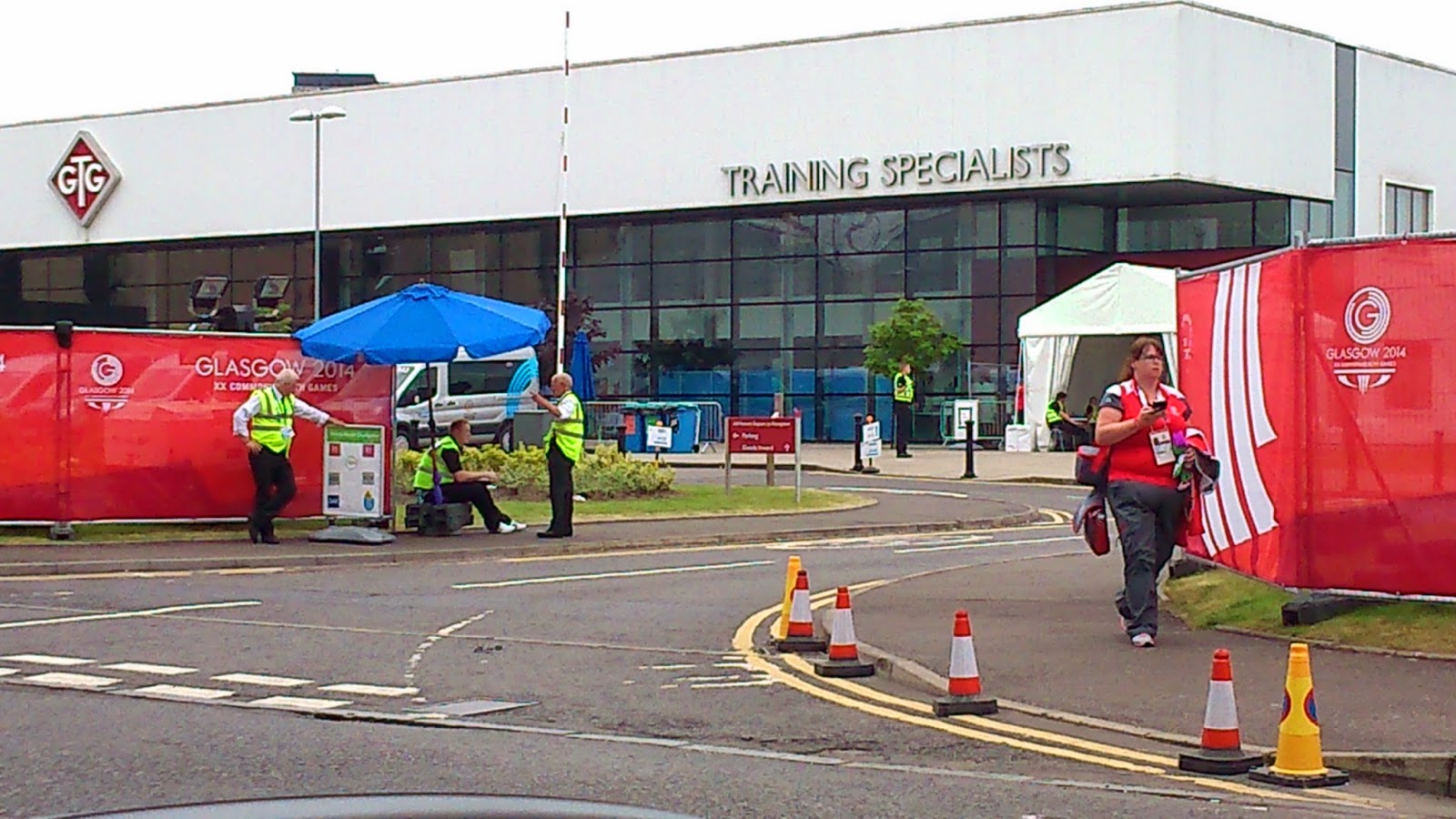 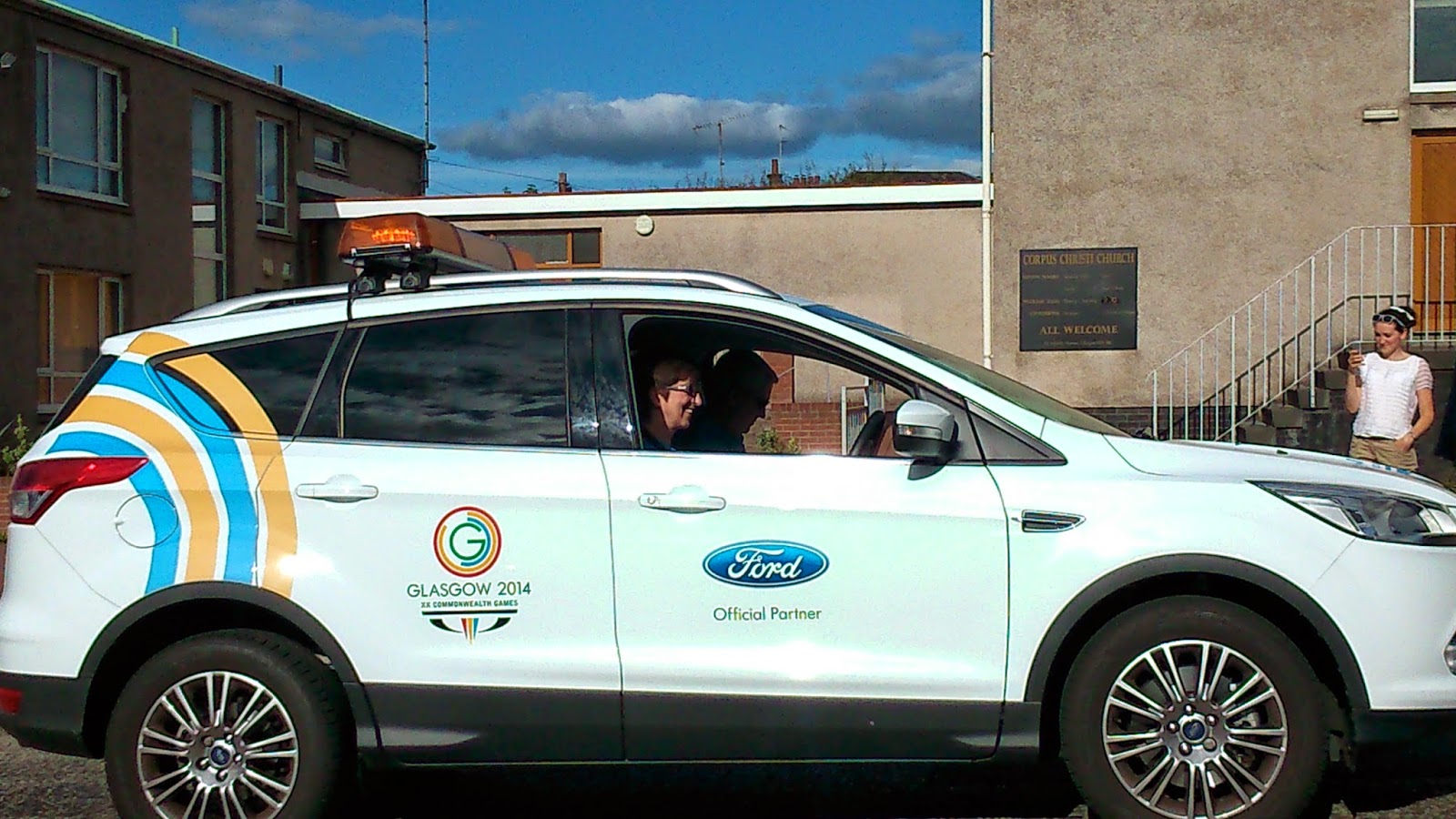 I suspect the lack of disruption to my long work journey that passed multiple games venues that might have something to do with the traffic management plans which left games fans walking for ages to venues or using park and ride facilities that almost incurred the need for passports. This sign in Hamilton had me laughing as I thought it sounded like the height of meanness for those going to the Triathlon. 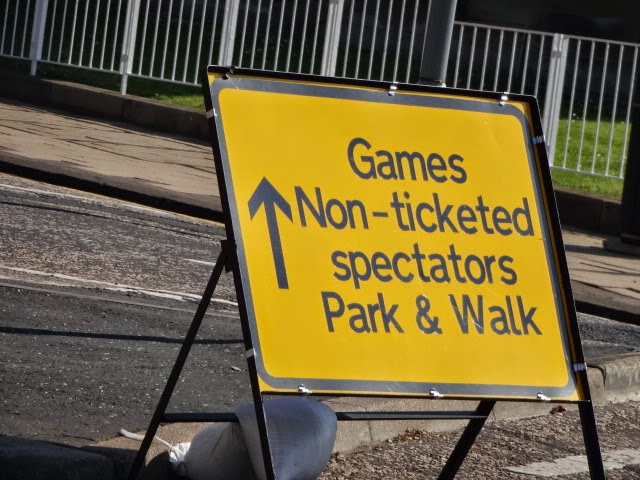 However, I think that what they meant was free parking for those walking to the event rather than an instruction to abandon your vehicle and start hoofing it!
Two nights before the Games started I managed to see the Queen's Baton Relay which changed over at Lincoln Avenue in Scotstoun. 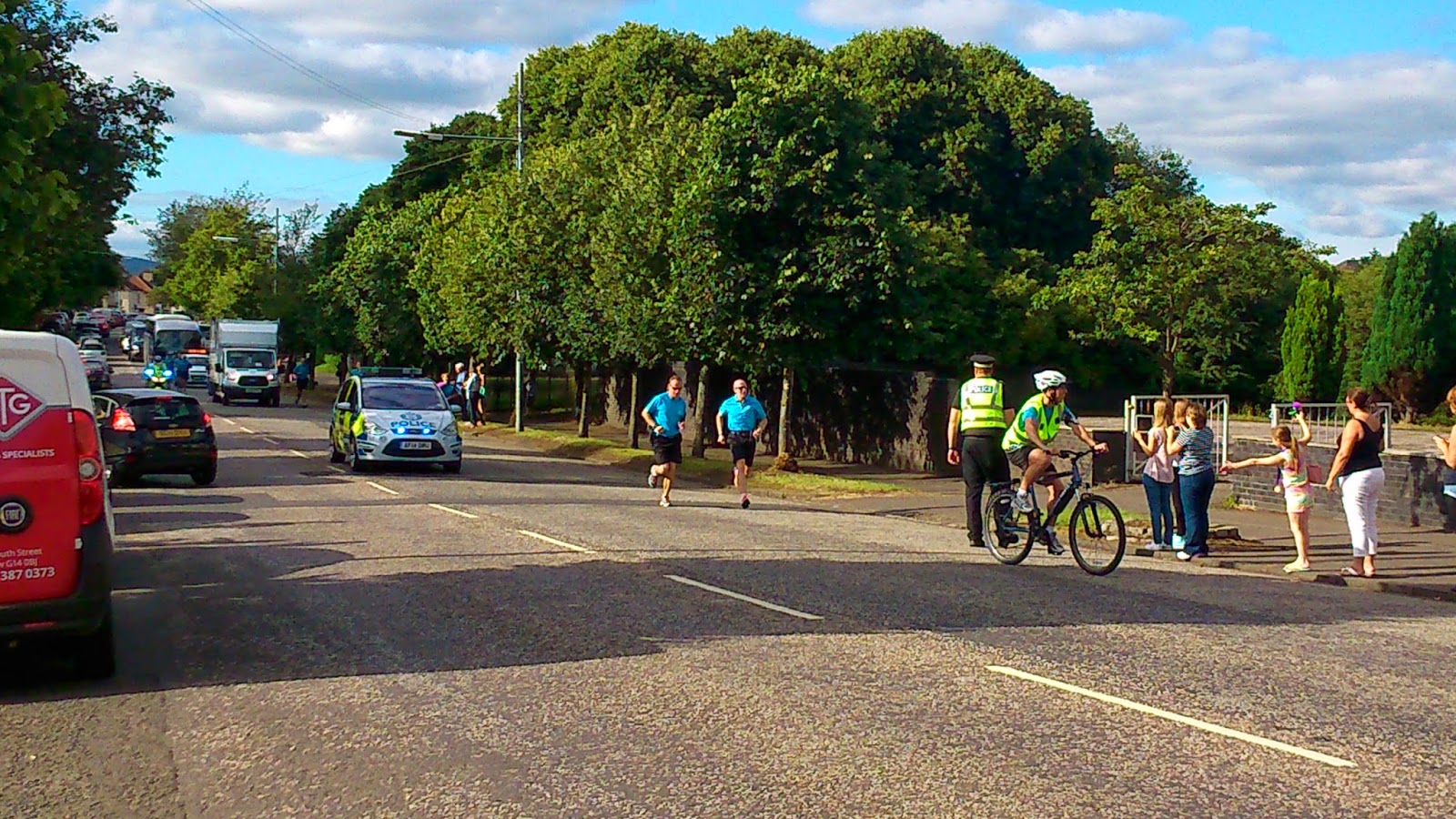 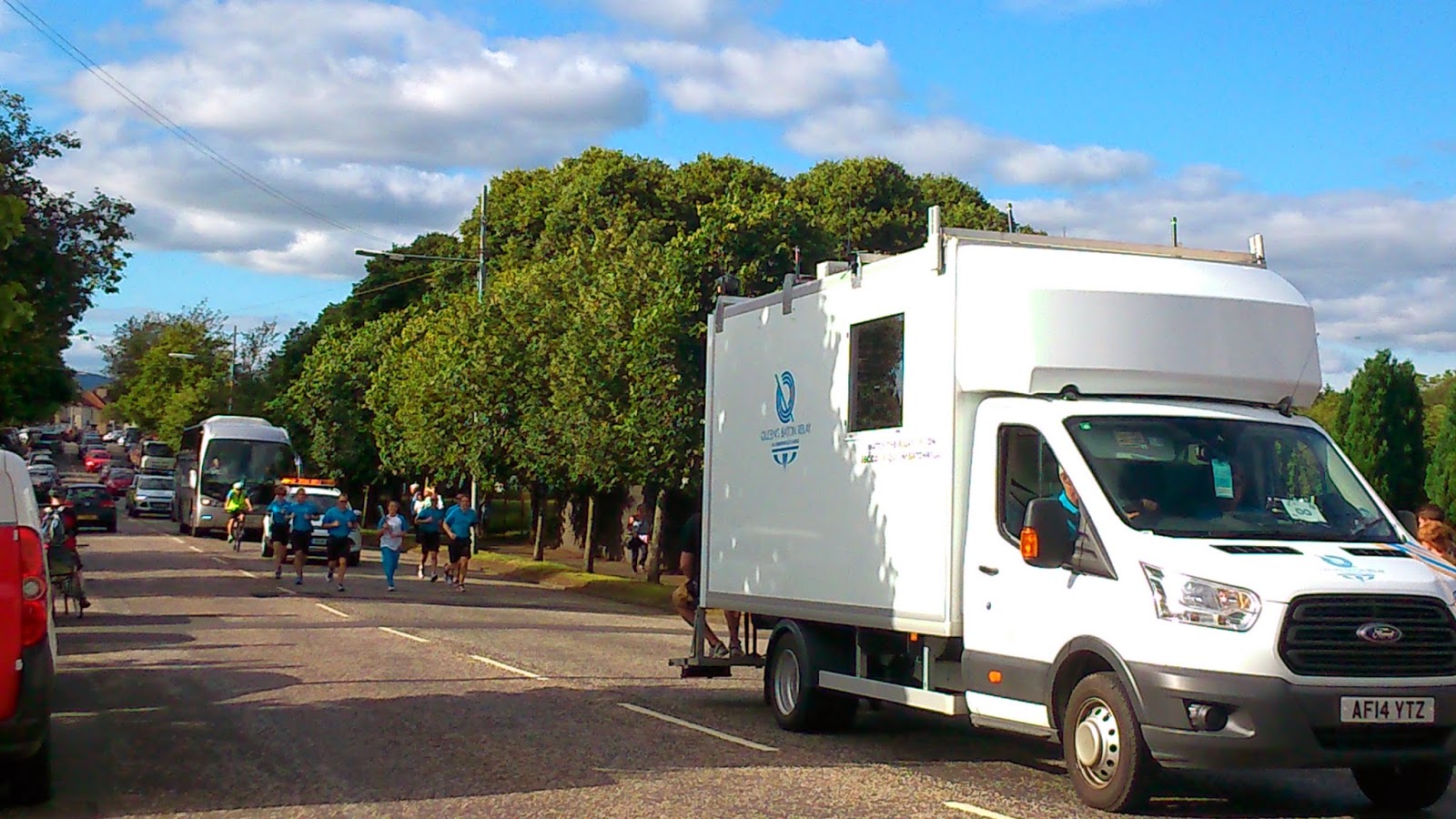 I'd love to say I'd planned this but I actually happened upon it on my way home so it was opportunistic rather than organised. 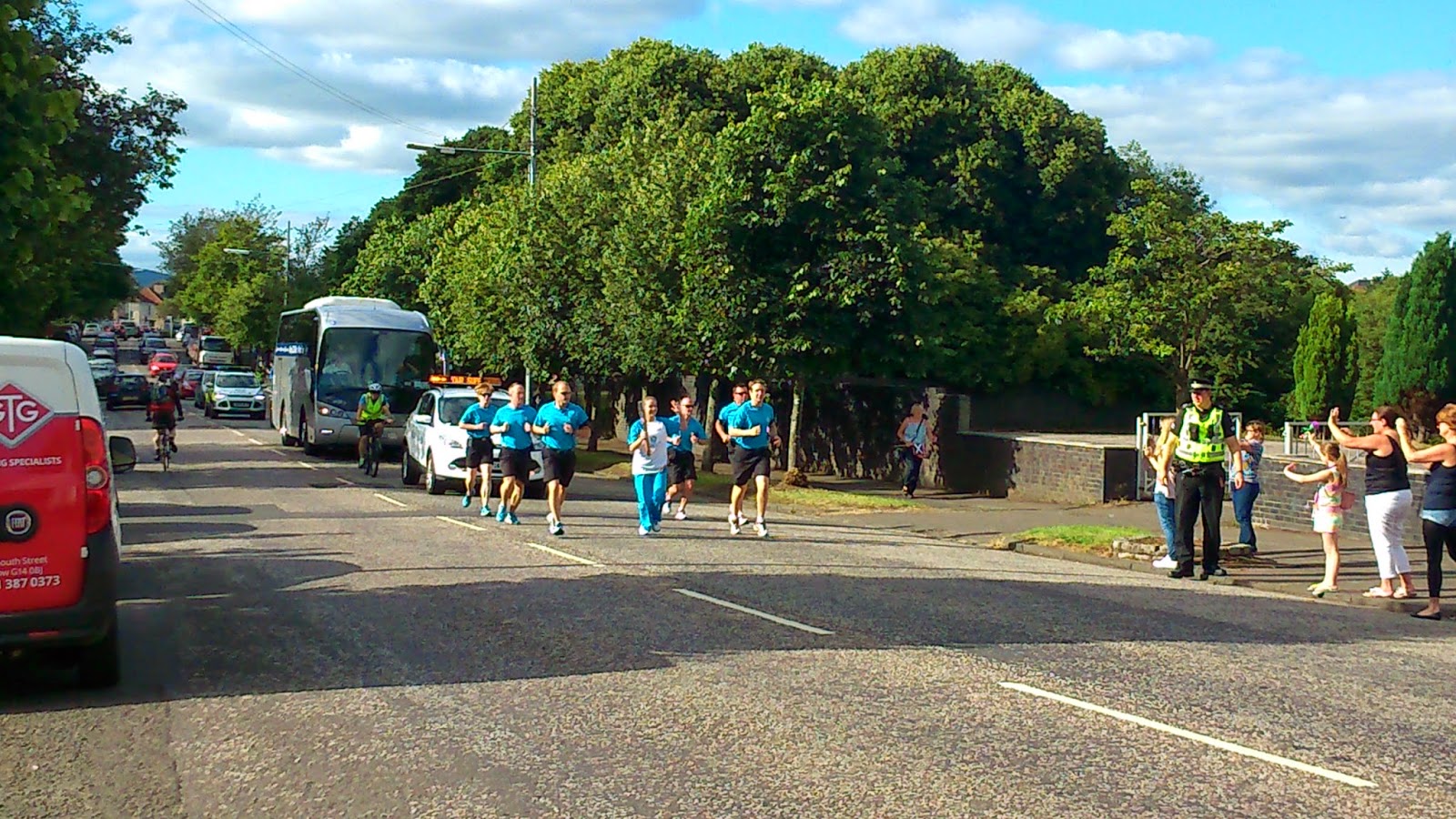 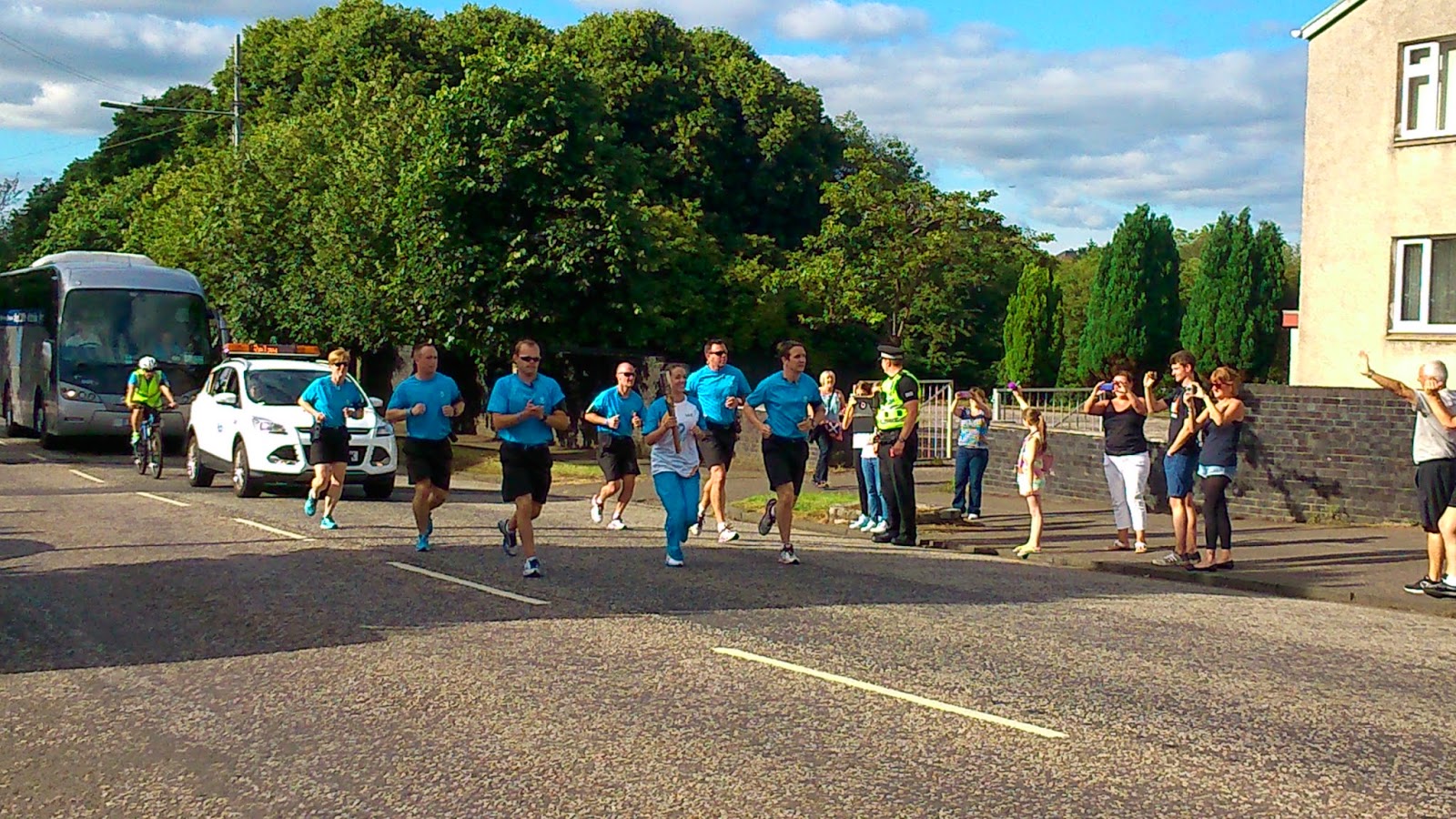 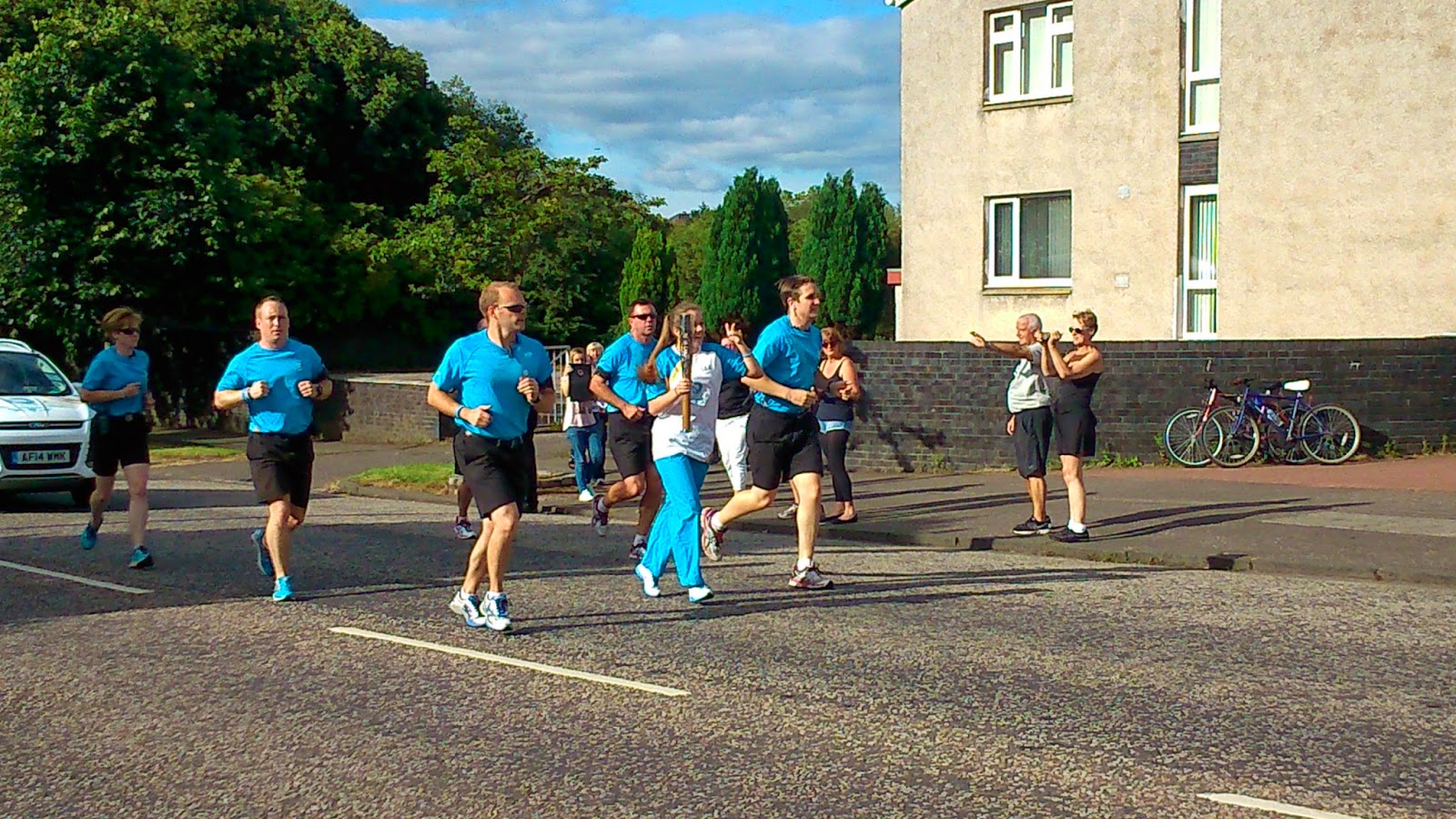 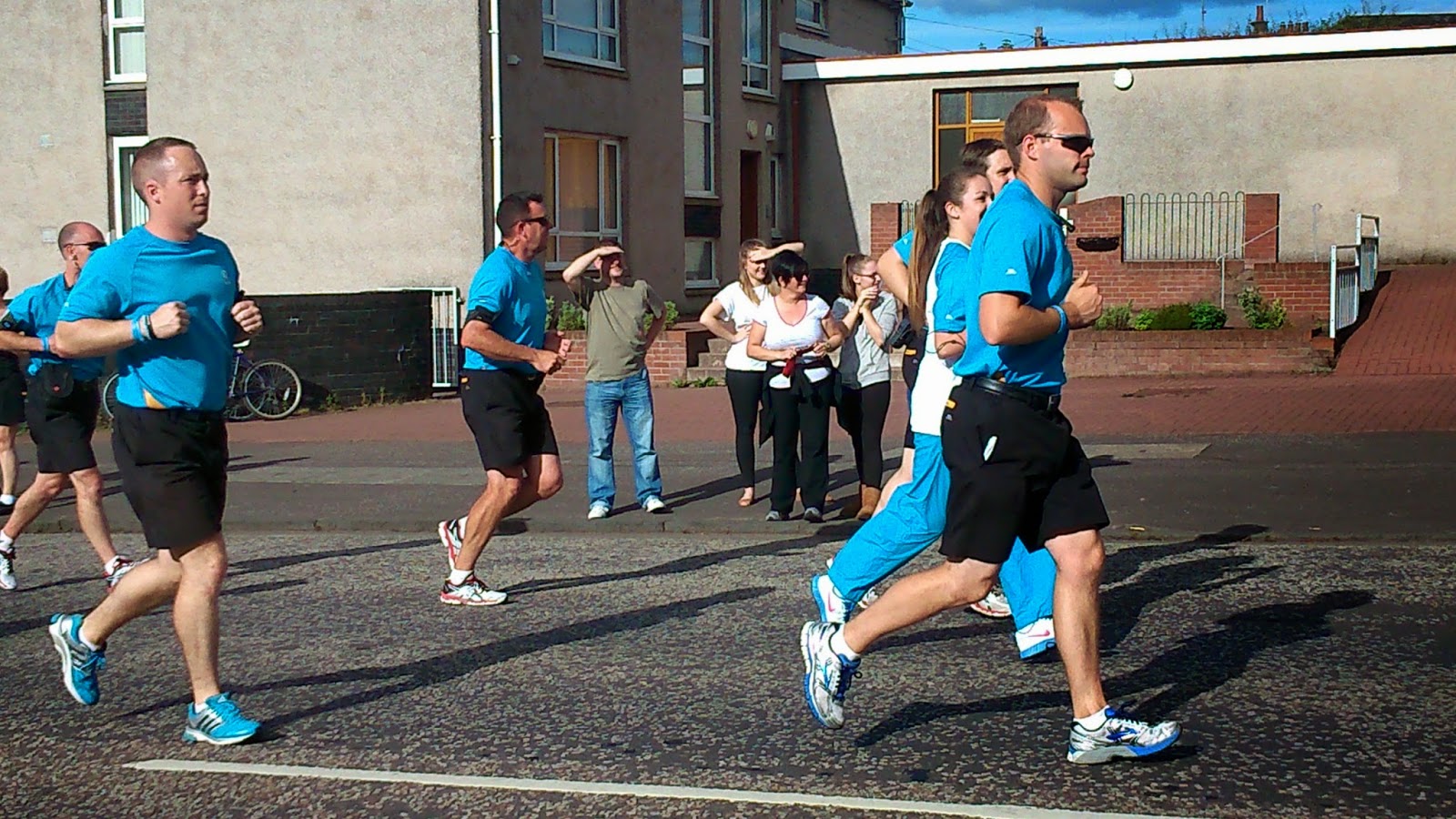 Last Saturday I was involved in doing another glucose curve on my newly diabetic cat and had only 2hrs between each test. 2hrs sounds not too bad but it is very limiting and a bit like an Anneka Rice dash to get out, do what is needed and then be back bang on time for the next one. 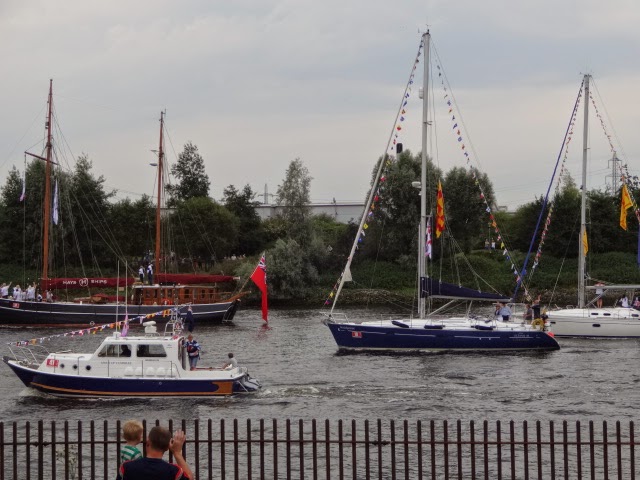 I only realised the Flotilla was coming up the River Clyde from Greenock the night before and really wanted to see it. If I had realised it was happening in advance I would probably have tried to join one of the passenger vessels and do the glucose curve on the Sunday. I feel very attached to the river as I've lived my entire life around its banks, my father was a shipbuilder and, for almost all my working life, I've crossed over or under it daily. 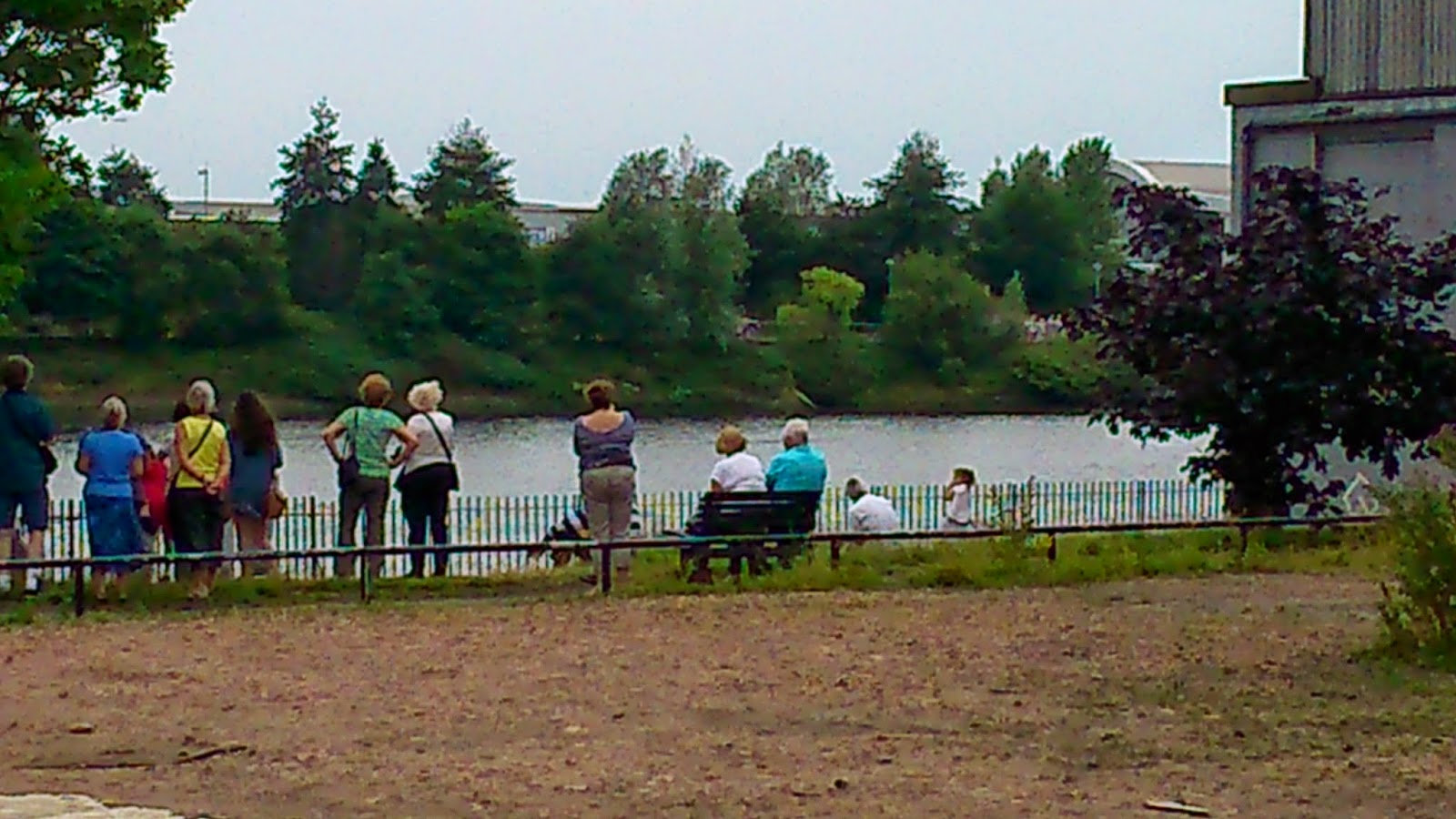 I calculated that they would be passing a little local spot where I could see it between doing the 12pm and 2pm blood glucose tests. Great vision for a midget like me as I could see perfectly, little to no walking distance and places to sit if needed, choice of car abandonment space and all within a couple of minutes of home. 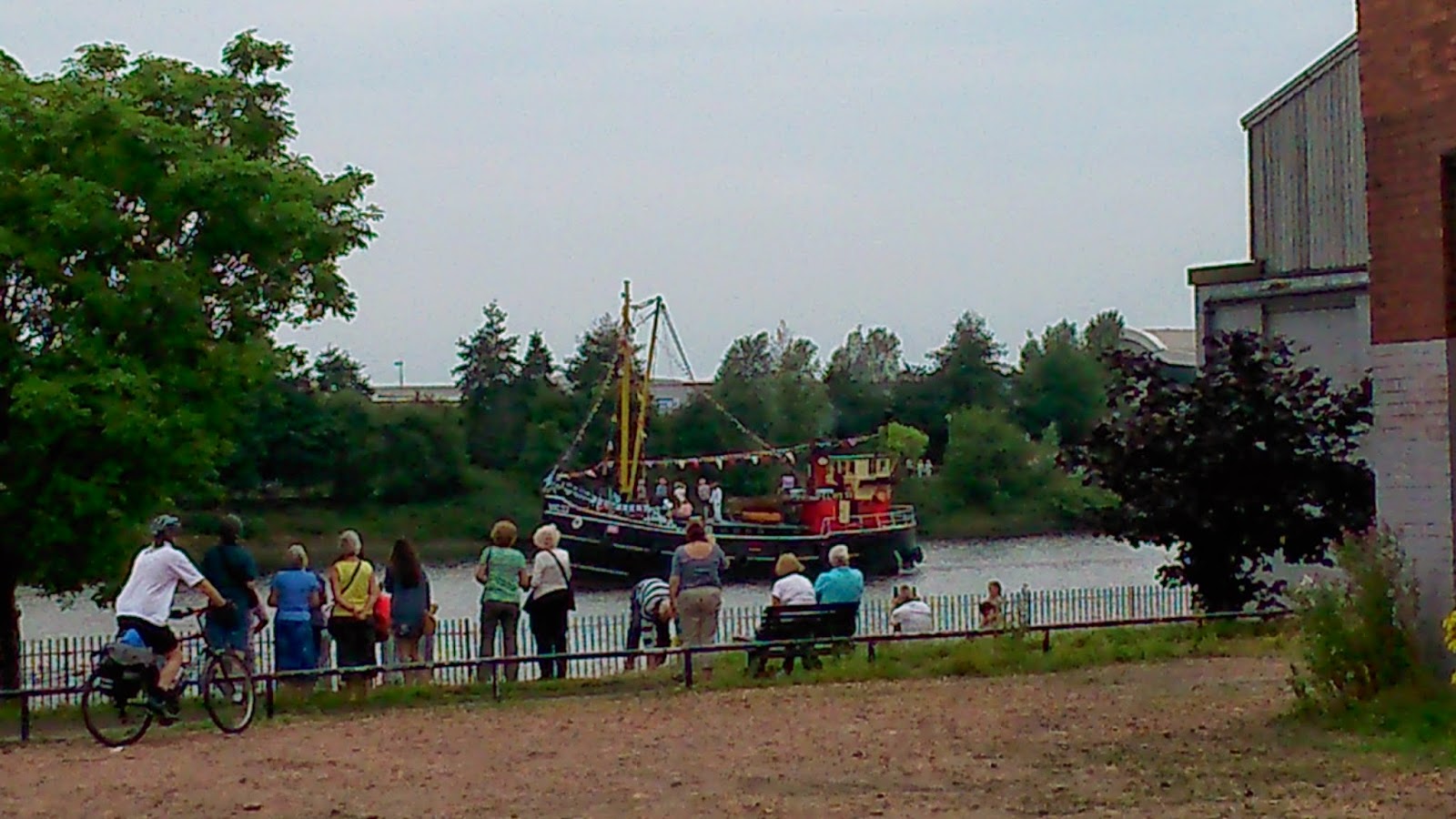 Across the river there was another little locals viewing spot too 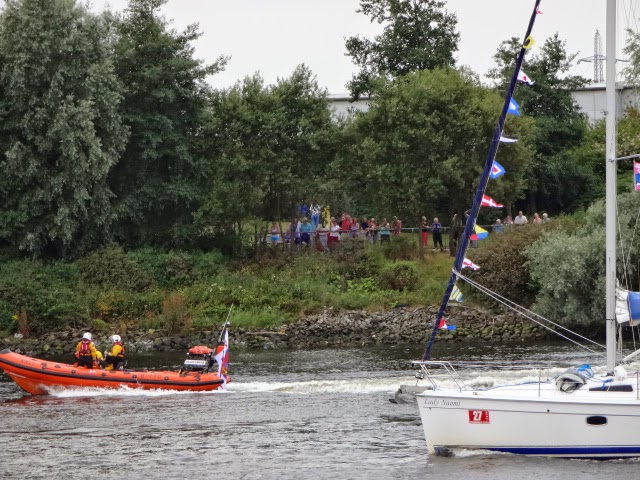 Compare our little nooks with the volume of people across the river at Braehead Shopping Centre who were absolutely crowded. Yes, we were on some amenity free industrial ground and they had all the facilities of the centre but I would certainly not swap. 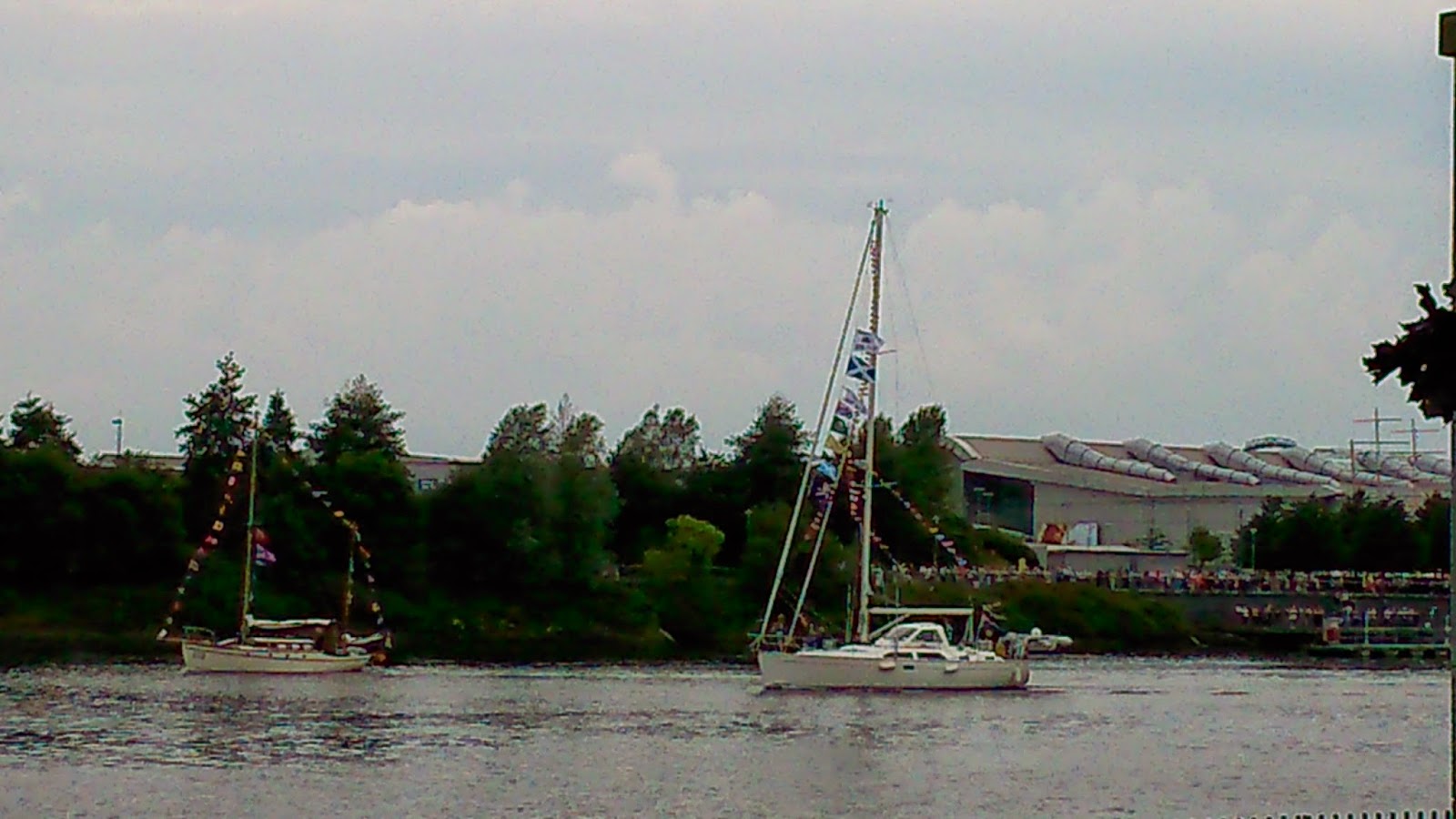 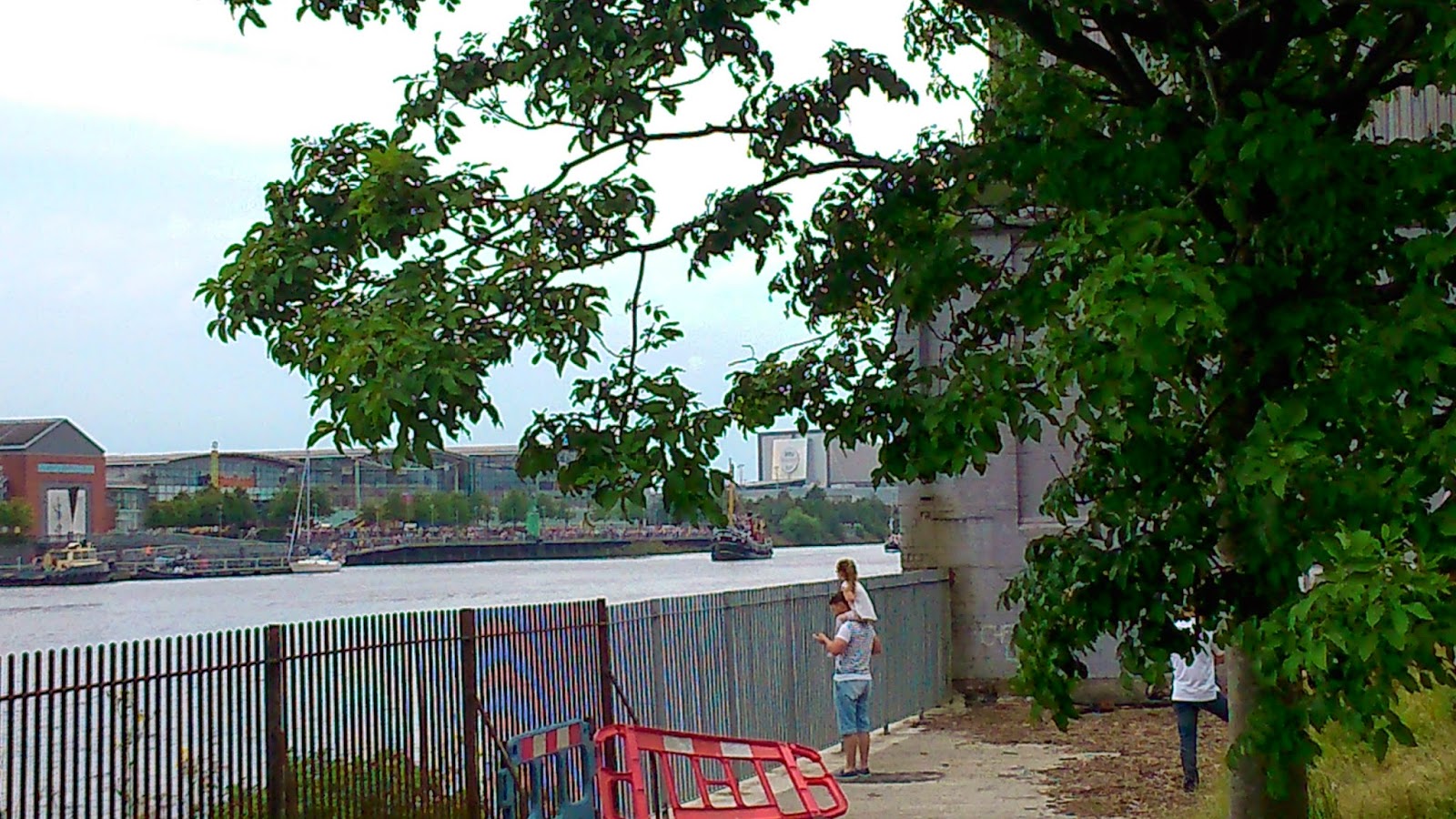 It was also lovely as a friendly older couple who were joined by their daughter began chatting and we had a very amusing time as they were very witty. Coincidentally their daughter, who is of a similar age to me, is having a career change from the Navy to go into a career allied to mine so we had lots to chat about as we watched the boats. There were boats of all descriptions joining the Flotilla and these are just a selection of the different crafts. 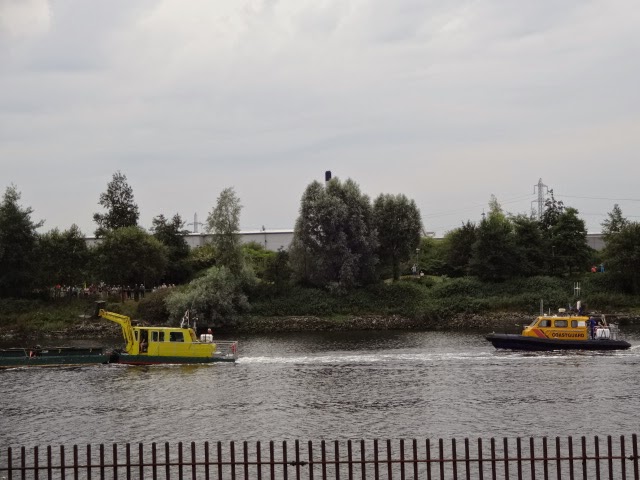 This was one of the newest Cal-Mac Ferries which had passengers on to enjoy the Flotilla on board. 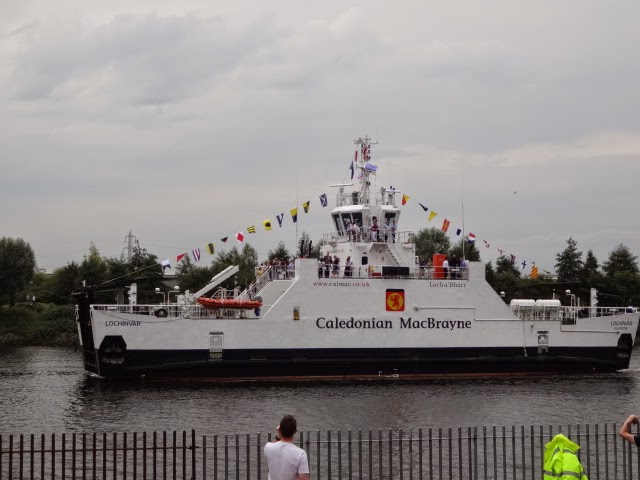 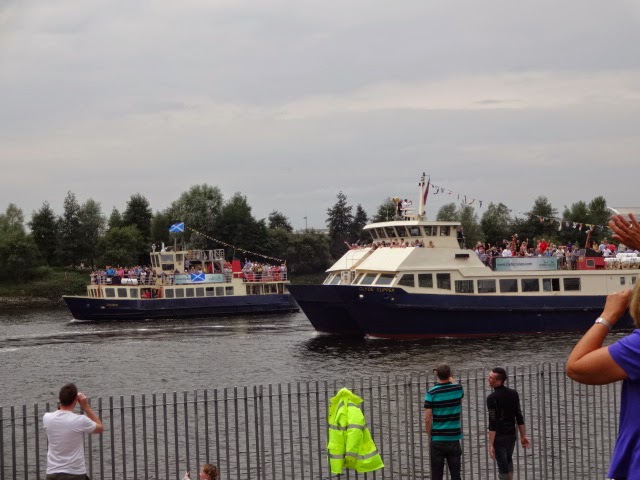 It was great fun as each of the boats was hooting horns, waving and there was much shouting and responding to "Oggy, Oggy Oggy..!" 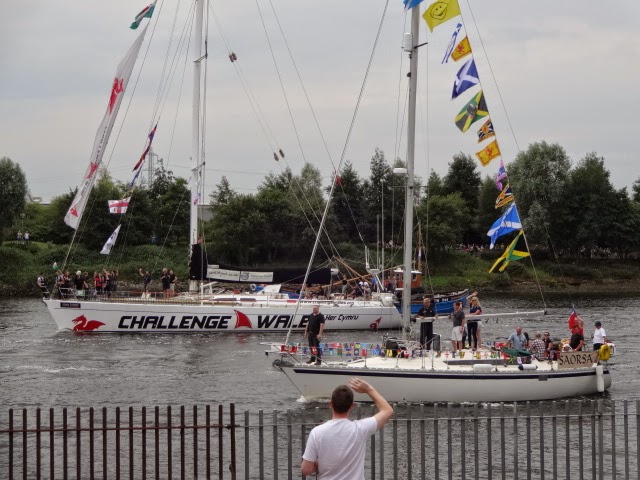 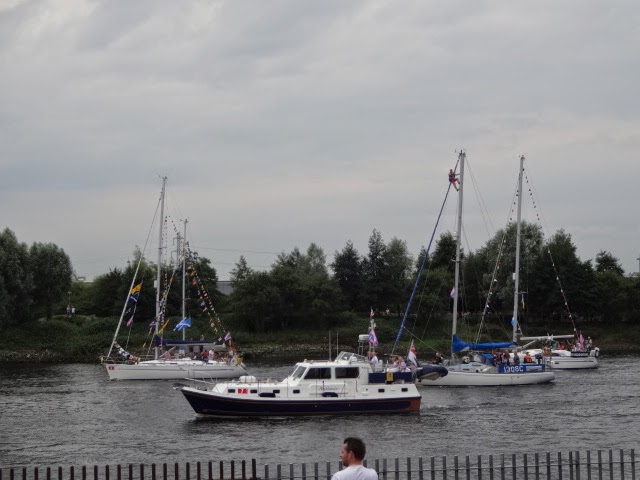 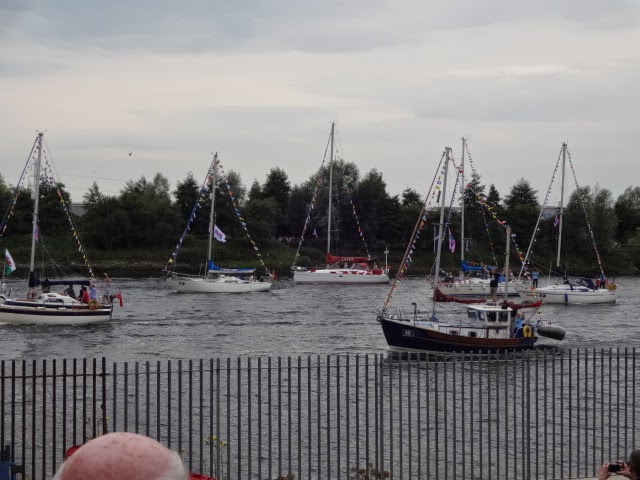 The boats were making their way up to the temporary pop-up marina at Springfield Quay. 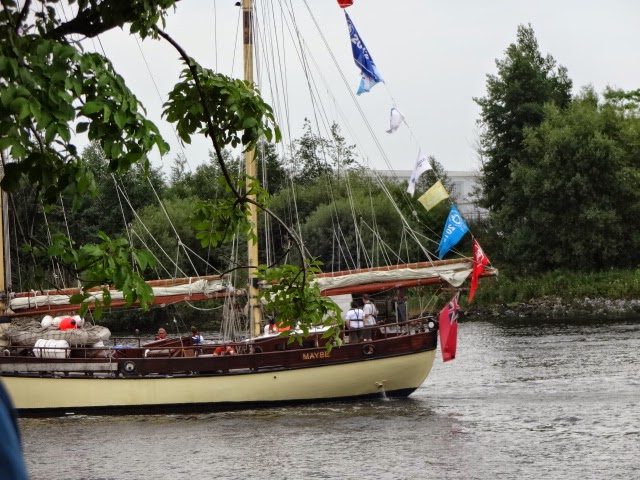 The girl I was chatting with and I were laughing and trying to spot Simon Le Bon as we both remembered his boat from the 80's. We also reckoned it rather accurately pegged our ages! However, later checking shows Drum is apparently now is owned by Arnold Clark, the car dealer, and not the delicious lead singer Mr Le Bon. 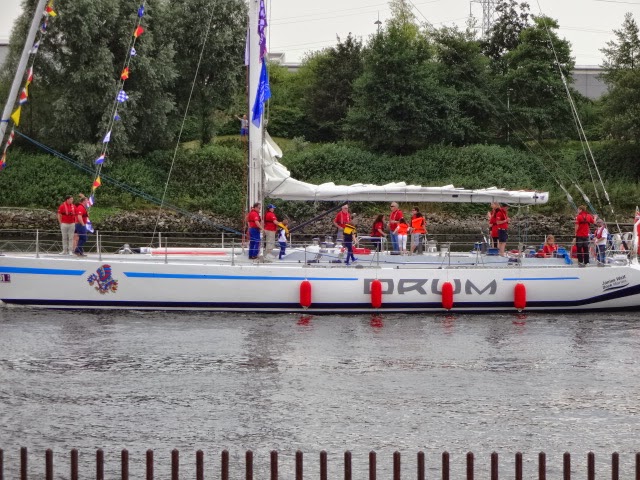 Today is the last day of the Games and it is such a pity that the weather is playing foul with odd spots of sun drowned by torrential such that an Ark is looking like the transport of choice. I just hope the closing ceremony goes as well as the opening one and well done to all those who brought joy and medals to their own countries.

Ps. Re: the 'we will dress like numpties' Irn-Bru poster. I've now seen it televised as part of an advert and it seems it is a comment on fans who dress to support events rather than a direct comment on the bizarre parade outfits. However, some people might believe there is no such thing as a coincidence!
Posted by RedSetter at 15:01