A Pause in Advent: Week One - Communication 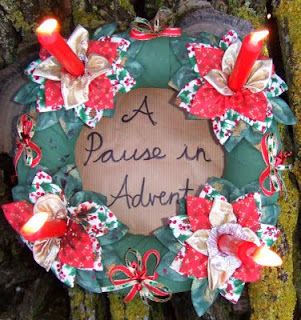 I have joined in with Floss for her Pause on Advent. When I read about it, it struck a chord within me and I felt it was something I'd love to be involved in and Floss has generously allowed me to participate. Then, I had to think what I might say, or reflect upon....!

I didn't want to write something so deep I would regret sharing it in a blog or so trite and upbeat that it was meaningless. For this reason my week one of advent is being published only hours from my week two pause.

I have read all of the blogs who are participating for inspiration and each is very personal and different which is fascinating but didn't help me find the 'tone' or subject for mine. So I did what I usually do when I first start researching something I need to write and asked Google for a definition. It gave me this: "Advent - the arrival of a notable person or thing"; and this got me thinking.

Sometimes the thing we await was actually here all the time but don't always realise it. I suspect there are two lost people in this relationship right now, God and Me. I still feel I have a strong relationship with God and that He is a permanence in my life but I haven't actually had much time for him and have simply taken him for granted. By the same token he might reside here with me but I see few examples of where he has stepped up to the mark, put himself out or is pulling his weight. I am sure if we were in a human relationship we'd be having problems of feeling used, taken for granted and not being valued for the unique individuals we are. We don't communicate much or spend time just enjoying each other's company.

Life has been hard recently, and if I am bluntly honest, this year has been hell with much sadness, fear, anxiety and frustration. Some aspects have also been blessed with great people and assistance but at the point of action or inaction the burdens have been mine alone and very heavy they have been. I do feel very put upon, and although I do not 'blame' God as such, I am deeply resentful that the last eight years have been so hard and that each time it looks like the possibility of a corner being turned is simply to slam into another brick wall. It is not an exaggeration to say that the stressors have been significant, sustained and unrelieved. Yes, they change but over time they have only been replaced with new and sometimes even more dreadful events or decisions. This is partly why I think have been crafting so prolifically as immersing myself in new learning is a kind of balm, or distraction, to my soul.

What I think I would like to get out of this Advent in moving forward to 2014 is a sense of balance and stability. I would like to find peace and contentment which will allow me to relax and enjoy life without having to keep shifting  my burdens from one shoulder to another. My hope is that by establishing a greater communication with God will prepare the way for something better and to find comfort in moving forward.

Email ThisBlogThis!Share to TwitterShare to FacebookShare to Pinterest
Labels: A Pause in Advent, communication