I was delighted this year to join in with the Christmas Decoration swap organised by Marianne at Ladybird Diaries. I was paired with Jessie's Needle and we both made contact to arrange our swap. I was also delighted that Jessie's Needle offered her help and expertise with any crochet queries as I was just getting back into crochet again and my first attempts were seriously wonky.

I am trying to do some catch up posts as lots of things have got in the way recently and I have a backlog to share. I'm sure Jessie's Needle won't mind me sharing this as I know she has got my package and sent me a lovely thank you note. We were later in doing our swaps but were both happy to live with the delay. I know she has sent mine but I've been having dreadful problems with delayed mail here so will blog again once it arrives.

I loved doing the decoration and spent ages deciding what to do. I scanned Jessie's Needle blog to see if I could pick up some colour cues but couldn't spot any common themes. I would have liked to do something crocheted or knitted but my skills were not up to speed and I was too shy to send a wonky item. I can cope with some degree of sub-perfection within a  handmade item but too much pushes me over the edge. So I decided to go with jewellery making as it is full of sparkle, has endless colour combinations and I had bought some snowflake wire forms that I'd bought in a lovely bead shop in Perth at least two years ago that I had never tried.

As always, no endeavour should be unsupervised by at least one of the fur overlords﻿ 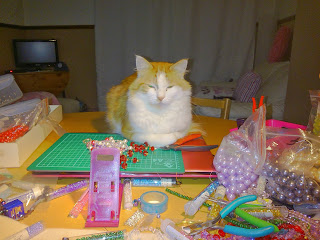 Many colour, texture, finish and size combinations must be explored till most of the dining table disappears 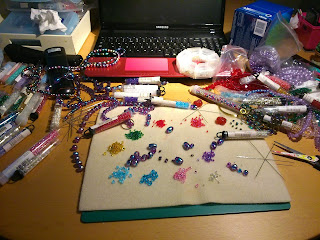 Eventually I found a pattern I was happy with which included elements I liked. The wire forms were a nightmare as they were so difficult to loop at the end and my first attempt was less than ideal, but I got there. This design is a mixture of faceted and coated rondelles and miyuki seed beads. The dangle is a blown glass puffy heart with a little chainmaille link. The tartan ribbon is a little nod to its Scottish provenance but mainly because it matched all the colours and seemed to peek out of my ribbon box. 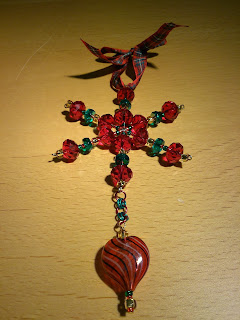 I found it hard to photograph the decorations when they were lying flat so I hung them on my little Yankee Candle Tart warmer. 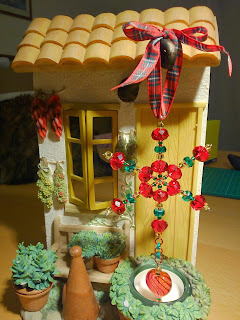 I enjoyed doing the crystal snowflake but as my sewing machine had arrived (more of this later in a catch up post later) I wanted to try something machine sewn and personalised. I tried a heart but going round corners and machine sewing was just NOT happening. So I went with a mainly straight line simple embellished tree. Please ignore the wonky stitch on the right, it definitely didn't look that bad as I recall, so I'm saying it is all down to the Lavender filling. 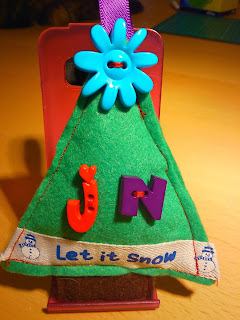 Hanging instead of just propped. 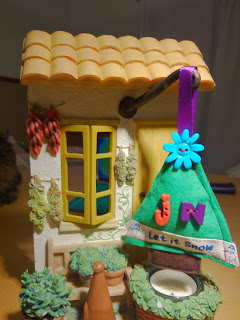 As I was in the 'zone' I decided to try another little lavender bag with some nice Christmas fabric and a matching ribbon. On the top left you can also see Magic's haunch as she was sitting with her back to me doing huffy snoopervising. 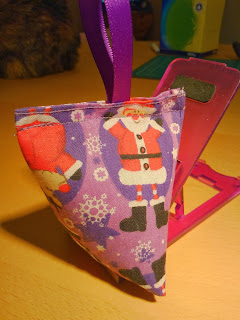 One of the trio with a snowflake punched card. 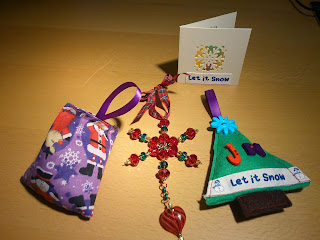 I even decided to put a snowflake and little jewel on the envelope. 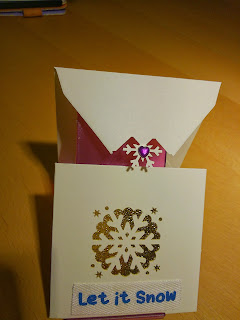 I had a ball making these and was delighted that Jessie's Needle liked them. I hope that we can keep in touch as she seems like a very nice person and I hope she has a lovely, happy and prosperous Christmas. I will definitely be joining in again next year if this is running again.
Posted by RedSetter at 00:37