I didn't think I was crocheting prolifically instead I was focussing on how hard I found patterns to follow. However, when I was taking some pictures of my recent makes on the only day where we had some sunshine I realised I'd actually come quite far. This picture shows my progression from supported granny squares to my following the collar pattern myself and creating something wearable. I've also made a couple of scarves but they were just in a simple half treble stitch. The lovely round ball we made after the granny square has gone missing. I gave it to Magic but she looked disgusted that she was expected to run after it and I think she may have hidden it. 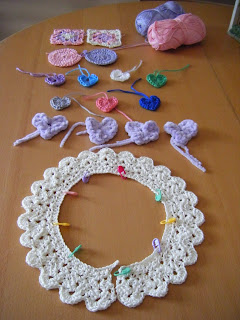 These are the squares and rounds Hazel helped me pattern. Mine is the squinty on the right with the white border. 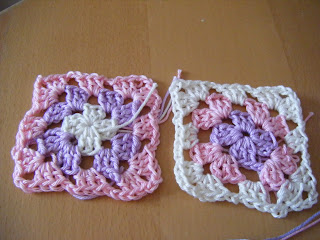 We then went on to make the circles and I cant recall which is mine. I cannot decide what I'm going to do with them so I've kept them attached to the ball of cotton and the stitch holder is keeping them secure. This is something I've started doing when I'm working on a piece between sessions. I was always finding the hook fell out, I dropped it or the cats had a little poke at it. So now I take the hook out and replace it with a closed stitch holder and it stops it ravelling out inadvertently. 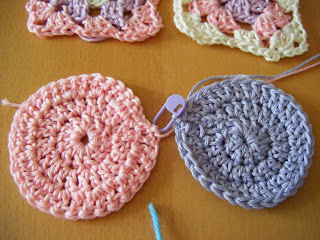 The little hearts were from a web tutorial written in US terminology and easy to do once I'd twigged to the pattern and used youtube. Less working to a pattern as making a template and copying that. This was where I managed to finally work out how to do the elusive 'magic loop' or 'adjustable ring'. I've watched countless youtube tutorials on this and cannot believe how something that is fundamentally very simple can be made to look complicated...either that or I just wasn't clicking to what I was being told. Hazel uses the chain method but something must be up with my tension as when I worked into the first chain space the centre of the heart just got bigger and bigger as in the purple and blue. 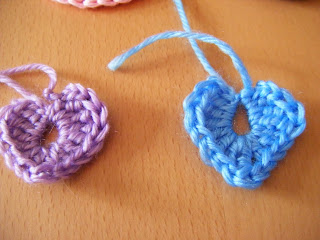 I fiddled about and ring loop just 'worked' and let me adjust it to keep the centre neat which I think looks better. I'm not sure if it might loosen once an item is made so I think I might work out some way to knot or sew it in firmly. 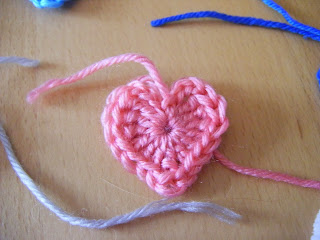 These were made to go on the ends of a long crochet scarf either stitched on or dangling. I haven't decided which yet. I cannot tell you just how soft and fluffy this chenille style baby wool is and how lovely it is to work with. It called Flutterby and is seriously gorgeous. Normally, I am not that fussy over synthetic fibres but this is a delight and I'm so looking forward to my long scarf being finished. It does make a bit of a squeak on the crochet hook so I've ordered some bamboo ones which should be smoother. 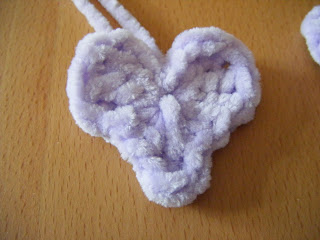 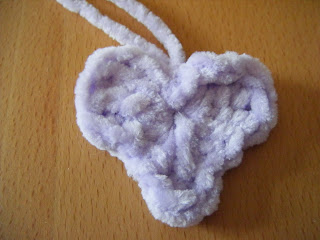 And these take us to my crochet collar which I've given a post all of its own. All in all, when I look at where I was a few weeks ago I don't think I've done too badly in reinvigorating my crochet skills. I can recall doing borders and edgings but never making a crocheted item like this collar that I could confidently wear. 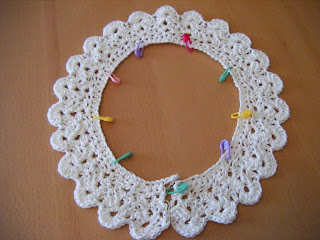 These are the books Hazel loaned me and I've found them very interesting though, as I said in another post just don't ever call me a Happy Hooker, even though I am pretty delighted with my completions to date! 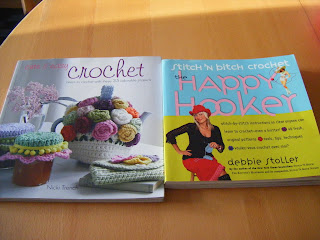