Oddly, enough the opportunity presented itself quicker than I thought and I settled down to start my first knitting pattern from Ravelry. I'd joined the site years ago but thought it was a bit advanced and only for hardcore knitters and not dilettantes like me, obviously I was wrong and it is a fabulous resource.

It definitely knitted up fairly quickly, all told it took me about 6-7hrs but this included using youtube for multiple reminders of the stitches, two false starts because it 'just didn't look right' and a number of row removals and re-knits. I found the first part hard to envisage as it looked really odd but this was due to my inexperience and inability to see the pattern until it emerged. I did find a counter app on my phone essential especially as I was able to tap it instead of lifting a pencil and making a note or tick. 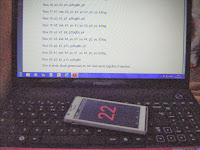 When finished it looked like a big wonky single cable and is quite narrow which means I'm going to be forced to learn how to block a piece of knitting. I will probably need to be careful as the wool is entirely acrylic. I didn't dawdle over my purchase as I was in a hurry. Actually it went along the lines of 'Do you have super chunky wool? Yes, that 's it there. Great I'll take the lilac'. It was only £2.65 a ball so excellent for a trial run and although very it is thick it still feels soft, unless of course I make it crispy with the iron when blocking! 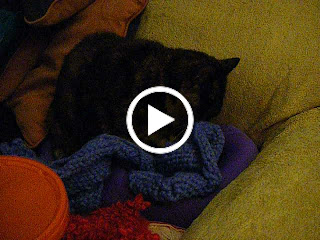 I don't have a proper finished picture of the cowl yet but in the meantime here is Magic checking the 'pudge-ability' of it.

I would definitely make another as it is fast to make up and I did get quicker as I got familiar with it. I wonder if it might be possible to use a slightly narrower yarn with the size 10 needles to give it more floppiness and I also wonder if it might be possible to do each row twice side by side to get a broader scarf/cowl which could be used as a makeshift hood if the need arises.
Posted by RedSetter at 00:15