Week three and my nemesis - bunting! I just can't seem to find the love for bunting which is odd as I love decorative, vintage items but the bunting remains a firm no-no. Some of the class brought in some utterly gorgeous Christmassy fabrics and one had a beautiful Black Watch Tartan. I rather wish I'd thought of this as I might have got some mileage or use out of my creation as I could probably have tolerated it for Christmas. As it was I'd bought the Cath Kidston-style Ikea print. It looks neat enough but I'm still not sure how I ended up with three subtly different sizes of pennants!

I also didn't realise you could get patterned bias binding, or that bias binding was simply fabric cut on the bias and folded. I thought it was some kind of special 'thing' that you bought, not something that you bought as it was easier to by ready made....how thick am I....? 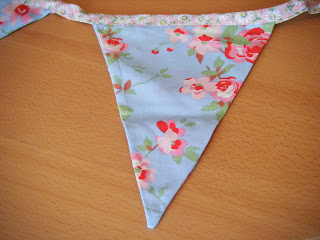 I did promise our lovely tutor Jenny that I would at least put it up, which I have done. However, it is up with white-tack and came down once photographed. 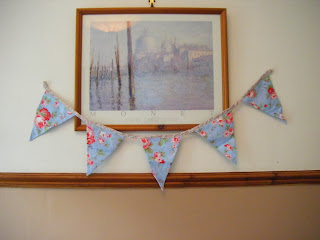 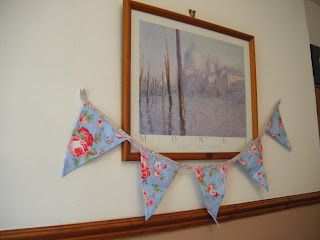 Week Four was more my style and we learned how to insert a zip and make a make up bag. I made mine a little larger. I should really have measured the size I needed beforehand as I wanted it for my Tunisian Crochet hooks but it fitted perfectly when I got home. I plan to use the blue and white fabric for making my knitting and crochet organisers as my freestyle project in week six. 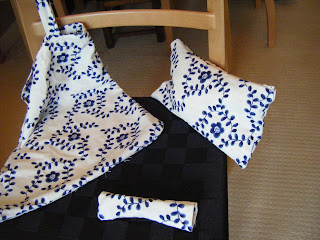 The little item is a slightly too tight glasses case made from scrap fabric. Waste not, want not! I've even ordered some dried lavender and plan to make little sachets with the other scrap pieces while I have access to the class sewing machine and will just hand sew the tops after filling and add some of the pretty ribbons I've been stockpiling. 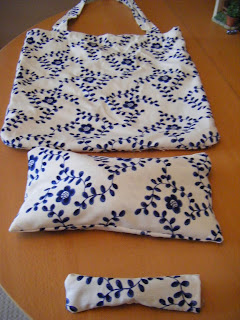 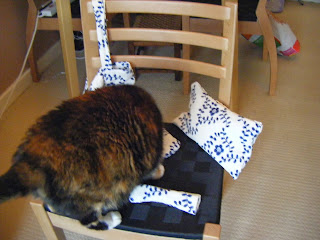 Of course, no attempted photo shoot is complete without the boss cat snoopervising. 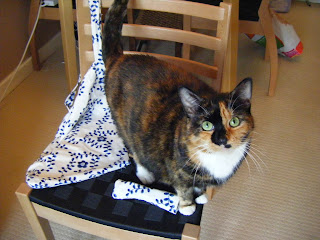 Week Five is a piped cushion cover and then we are let loose on out own creations.......!﻿
Posted by RedSetter at 19:10