I've blogged about my terrible fixation with scissors before, but once again I've been seduced by the lure of more, and the holy grail of better snippiness. 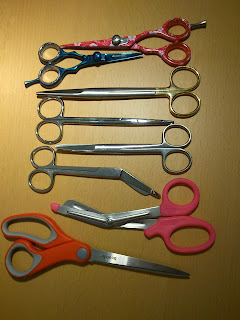 On this occasion, I blame the damn heart pompom makers....! I got my lovely makers and am seriously chuffed with them but they have totally blunted my dinky razor sharp scissors that I got on a magazine because of all the major league snipping that needs to go on. In thinking about the problem I decided some curved scissors might be useful, or even ones that could be sharpened at home, or even some kind of specialist scissors....? See, I think waaay too much about scissors. Anyway, somehow four pairs 'fell' into my amazon basket. This isn't even the worst of it because then I decided to see if I could get them cheaper, and ebay had some good offers and some alternatives I hadn't thought of.....and then somehow I'd ordered eight pairs. Admittedly, these eight were cheaper than the four on amazon, but the bit between selecting and buying is somewhat foggy in my brain. So here are my latest purchases, or 'roll call of shame' if you prefer.... 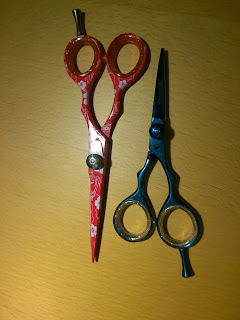 There are the hairdressing ones - super sharp, fab on hair AND fur. Unfortunately, I know this because Magic happened to be sitting on my lap when I opened the packet, and once I'd test snipped the odd few ends of my own hair the lure of a full coat furry beast who probably wouldn't miss a wee strand or two was just too tempting. Best of all these scissors are 'pretty' and I can fiddle with the tension screw, handle inserts and little finger rest. I've tested the blue ones on the heart pompom maker and they are fab. As you know from my last post the fringe trim went very wrong with the blue ones but that was entirely my fault as normally I use whatever scissors are to hand instead of razor sharp ones. 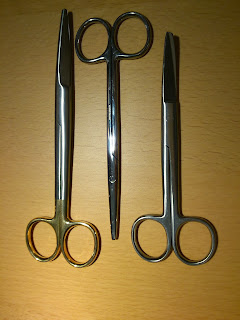 Then there are the surgical scissors. Surgical scissors are pretty sharp and can always be sharpened again if needed? The ones with the gold handles most resemble the single pair of household ones we had all of my young life. These are what probably started my terrible scissor compulsion as they were perennially lost and I was almost always the culprit as I'd mislaid them under a pile of crafting. I still don't understand why my parents only ever had one single solitary pair kept in a long flat Tupperware box in the house. These childhood ones were plain shiny but I love these gold 'bows' for added prettiness. The curvy ones and the small ones I thought might help me trim the heart pompom's more accurately. I am mystified by why I bought the small straight ones as the longer ones are much better but I think I was still a little nauseated by having seen the other suggested scissors described as dental ones for cutting gums which made my stomach flip and I must've clicked on the extra pair just to get off the page. These small ones don't seem quite so sharp and are too thick to use with the pompom makers so these might get relegated to being paper scissors if they don't pan out with material. 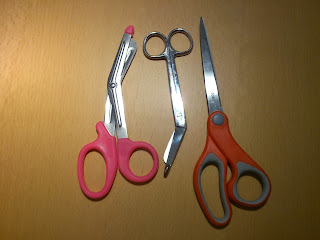 Then there are the work horse scissors useless for pompom making, so no idea how they ended up in this order. The pink handled ones are tuff-cut shears useful for more things than you can ever even think of. If you've never owned tuff-cut or paramedic shears then you need some in your life. I've had this type since I got my first pair nearly 30yrs ago and they are fab. The really good ones are reputed to cut a 2p, but I never fancied wrecking mine trying to prove this. I've used these to do everything from work to DIY to haircutting (my hairdresser winced when I admitted to this). I think these fell in my basket as they are pink and this is the one colour I've not had. These are a smaller than the standard size tuff-cuts but are still very functional. The little ones are Lister bandage scissors and, like the tuff-cuts, will be good for slipping below two layers of fabric as they have the little scoop edge unlike my big fiskars dressmaking ones. The Lister's might benefit from a bit of a sharpen up if I every find my sharpeners in the spare room of despair. The Scotch ones are probably best kept for getting a nice clean cut or glide on wrapping paper.

So, I suppose I must admit it now....Yes, I am RedSetter and I am a scissor-holic.....though I am not sure I want to be cured right now till I've had a really good play with all of my new lovelies!

Do any of you have an enduring fixation for a particular craft tool or item or am I on my own in this?
Posted by RedSetter at 13:31